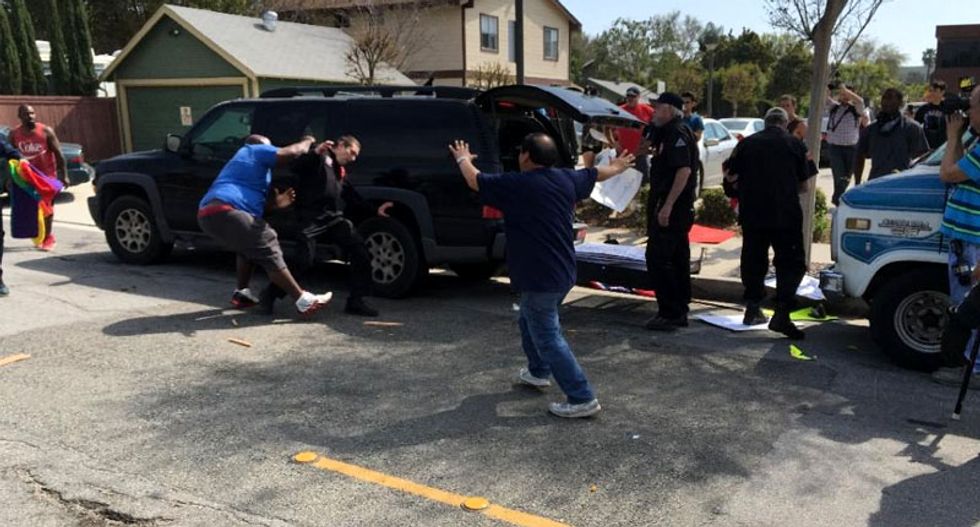 Picture courtesy of the Center for the Study of Hate and extremism shows a counter-protester (L) tackling a member of the Ku Klux Klan (KKK) in Anaheim, California (AFP Photo/B. Levin)

Three people were stabbed, one of them critically, and 13 others were arrested in California when a Ku Klux Klan rally erupted into clashes with counter-protesters, witnesses and police said.

Around midday, half a dozen members of the white hate group, whose ranks still number several thousand in the United States, arrived at the protest site in Anaheim, officials said.

At that point the Klan members were "swarmed" by protesters, who attacked them with at least one wooden plank, witness Brian Levin told AFP.

Local police spokesman Sergeant Daron Wyatt said it appeared that "six KKK people arrived and were immediately attacked by counter-protesters, which led to a counter-protester being stabbed."

The initial clash spawned several separate fights, Wyatt added, noting that the three stabbing victims were all counter-protesters, while another two KKK members were stomped by the crowd.

One of the victims, he said, was stabbed with the decorative end of a flagpole, according to The Orange County Register.

Of those arrested, six were KKK members and seven were from the rival demonstration, Wyatt said. All were men, except for one woman in each group.

The counter-protesters "smashed the side window of the Klan SUV and the front windshield," said Levin, who heads the Center for the Study of Hate and Extremism at California State University in San Bernardino.

"At that point, the crowd got extremely violent."

Some of the protesters started kicking a man wearing a shirt that read "Grand Dragon," said Levin, describing the KKK members' wounds as ranging from minor to significant.

"He was kicked when he was down" on the ground, he said.

Levin said he had attended the rally as an observer, but ended up standing in between the Klansmen and the crowd of angry protesters to try to stem the violence.

"I helped two Klansmen get out of the way," said Levin as he headed to the police station to give his witness statement.

After pushing a Klansman away from the crowd, Levin said he asked him: "How does it feel that your life was just saved by a Jewish man?"

The man replied "thank you," according to Levin.

The city of Anaheim has a long history of KKK activity. In 1924, four of the five members voted to its City Council belonged to the Klan.

Local media reported that KKK fliers had been distributed at various points over the past year or so on dozens of area lawns.

"I've lived in Anaheim my whole life and I have never heard of anything like this," local resident Joe Castaneda told The Orange County Register after watching the fight break out.

The Klan, which was formed in 1865, had up to four million members in the 1920s, but its membership has dwindled to between 5,000 and 8,000 individuals today, according to the Southern Poverty Law Center.

Although it has historically targeted blacks, the Klan has also launched attacks against Jews, immigrants, gays and lesbians. Until recently, it attacked Catholics as well.

Watch video, courtesy of KLTA 5, below: