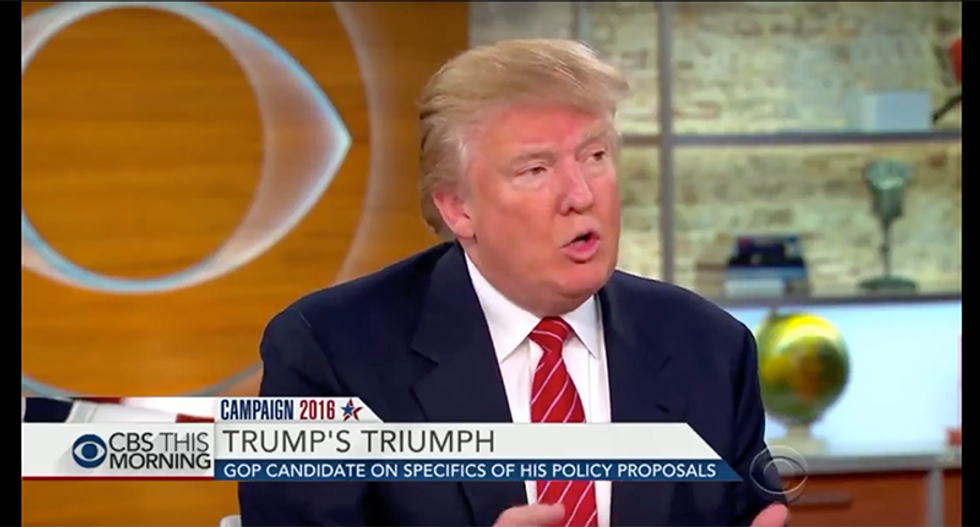 Charlie Rose had a bizarre discussion on foreign policy with Donald Trump on Wednesday's "CBS This Morning." While Trump has been campaigning on a bomb everything approach to the United State's global solutions. However, when it comes to Trump's ideas about Syria, they seem remarkably similar to President Barack Obama's.

Co-host Norah O'Donnell asked Trump if the United States should commit ground troops into Syria as Middle Eastern leaders are pressuring President Obama to do. Trump blew off the question instead saying that he loves the fact that "Russia is hitting ISIS, and as far as I'm concerned, they've got to continuing hitting ISIS."

O'Donnell seemed confused asking if Trump understood that Russia was bombing the groups that the U.S. was backing. "And why are we backing the group? We don't even know who those people are. I speak to generals, they say we are giving billions of dollars of equipment to people we have—here we go again," Trump continued as Rose nodded. "They're probably worse than al-Assad. I mean al-Assad is no baby, he's not good, but who are the people that we're backing? Here we go again, with Libya—"

Rose cut Trump off, "you know that's President Obama's argument. That we don't know who the weapons will fall—into whose hands." Co-host Gayle King agreed under her breath.

"Well, I think that's good," Trump said shrugging. Asking why Obama was doing it. "I mean he's giving them a lot of weaponry."

After ending efforts to train Syrian rebels in 2015, President Barack Obama said he never thought it was a good idea. "This is why I've been skeptical from the get-go about the notion that we were going to effectively create this proxy army inside of Syria," Obama told Steve Kroft on "60 Minutes." "My goal has been to try to test the proposition, can we be able to train and equip a moderate opposition that's willing to fight ISIL? And what we've learned is that as long as Assad remains in power, it is very difficult to get those folks to focus their attention on ISIL."

Robert Ford, the former US ambassador to Syria, was one of the ones advocating that the U.S. arm the rebels back in 2012 when al-Assad's regime seemed to be faltering. Former CIA Director David Petraeus, former Secretary of State Hillary Clinton and most of the foreign-policy establishment in Washington on both sides of the aisle wanted to arm the rebels. Obama, the top members of the national security staff and vast majority of the American people were opposed to it at the time.

The battle ended in a stalemate where Obama and his deputies postponed announcing any plans at all. Ultimately they asked Congress for funding hoping that the U.S. could train 15,00 rebels, but in 2013, the CIA began a covert operation to vet, train, and equip moderate rebels to undermine al-Assad's regime.

In the end, it has been the worst of both worlds where without al-Assad in power, many suspect the Taliban or ISIS would take over the country, but with him in power thousands of innocent people are being killed and refugees are running for their lives.

Russia, on the other hand, has been laying waste to where the Syrian rebels are with heavy air fire at the urging of al-Assad with Iran and China standing as allies. In January, Russia's bombing campaigns have killed more Syrian fighters and civilians than it has ISIS militants.

Trump explained to CBS that he would be an ally with Putin, which means the U.S. would also become an ally of Syria's. He's also agreeing with Iran here saying that both countries want to back al-Assad. When asked if Trump thought he could get Putin to get al-Assad to step aside, he said that he didn't think it was that important.

Trump continued saying that if the U.S. were to get rid of al-Assad that it would end up like Libya when we got rid of Muammar Gaddafi. Rose asked Trump if he thought getting rid of Gaddafi was a mistake. Trump replied, “yeah, to me, it was a total mistake. I mean, Benghazi. Look at what’s going on over there. Nobody knows anything about anything. You look at Saddam Hussain, it’s the Harvard of Terrorists,” Trump said repeating a line he’s used many times about Iraq.

Rose asked Trump to clarify that he thought getting rid ofGaddafi and Hussain were mistakes. Trump agreed, saying that if the politicians had gone to the beach things would have been a lot better off.