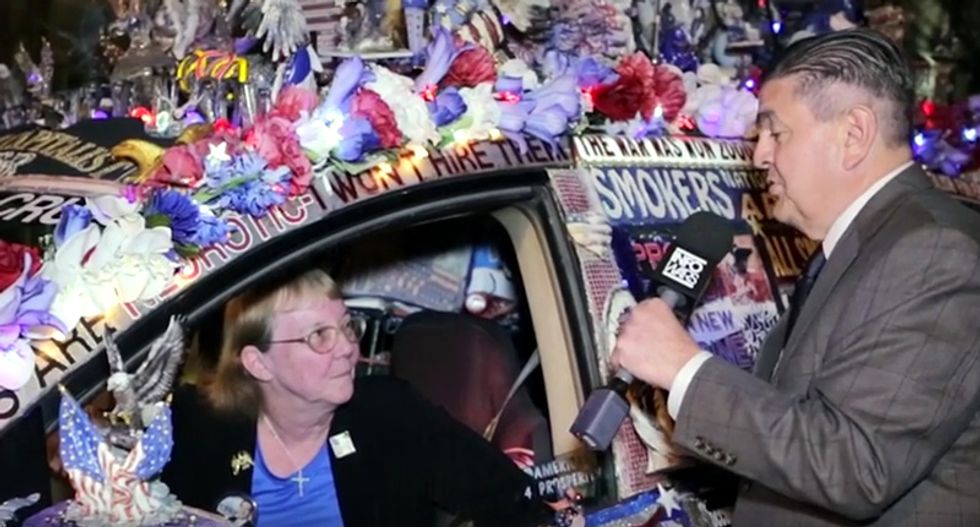 In a fascinating video posted to YouTube, a grandmother traveling the early primary states in her "award winning Liberty Van" attempts to make the case for Texas Sen. Ted Cruz, while blaming Hillary Clinton for a traffic stop in West Virginia.

According to Linda Farley, her extensively decorated van -- featuring banners, Christmas lights, flowers, statuary, and Uncle Sam riding a "Socialism snake oil" rocket to Hell next to a tribute to 9/11 -- won an award at the Houston Art Car competition in 2011.

Farley stated that bedazzled van was a labor of love that took ten years to get to its current state.

The woman stated that her patriotic van was once pulled over by police in West Virginia for having Christmas lights on it -- a stop she somehow felt was influenced by former secretary of State Hillary Clinton and a loss or "personal liberty."

This year Farley-- who identifies herself as a "smoker's rights" advocate -- is traveling to the early primary states to stump for her favorite candidate, as evidenced by "Cruz'n for the Constitution," painted on her rear bumper.

Having already been to Iowa and New Hampshire, Farley claims she is in South Carolina to support her favorites to make sure they stay in the race.

"I'm sick and tired by time we get a primary in Kentucky all the good ones are gone and I have to pick from the lesser of the evils," she explained. "And I decided, since I'm retired and I have this rolling billboard here, that I would try to help out the one that I think is not the lesser of evils."

Asked what issues she thinks are most important, Farley replied "individual and property rights" before going off on the topic of eminent domain, and taking a swipe at GOP front-runner Donald Trump who attempted to use the legal proceeding to acquire property for one of his casinos.

"If you  take somebody's home because you want to park limousines for your casino, I think that stinks," Farley stated.

According to the woman, the Liberty Van is not her only rolling billboard, directing viewers to her libertyvan.com website where they can see the equally eye-catching "Freedom Van."

Watch the video below uploaded to YouTube by the Alex Jones Channel: