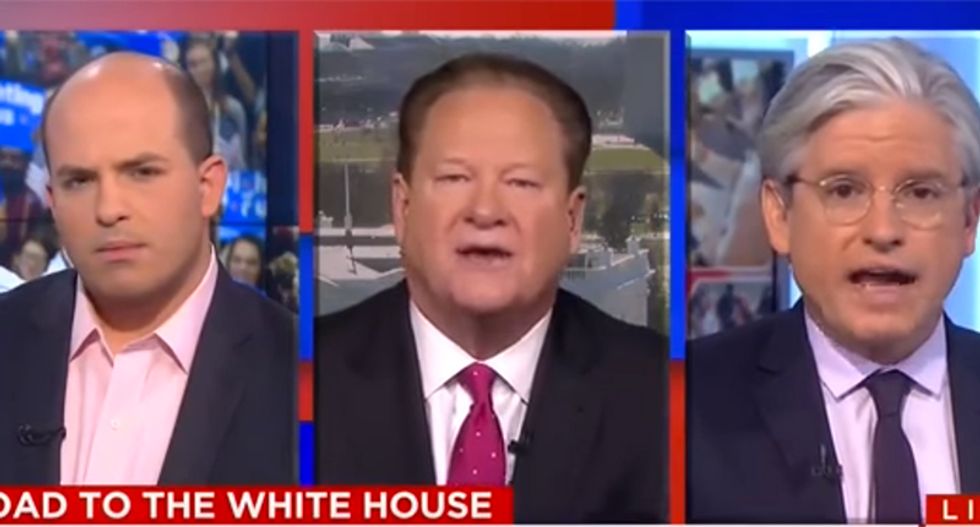 Former MSNBC host Ed Schultz may be at RT now, but this morning he appeared on CNN discussing the 2016 democratic presidential race. Schultz is a huge Sanders fan claiming at one point, "I probably put Bernie Sanders on TV more than anyone else when I was doing a cable show. And I am proud of it." David Brock is not only a Hillary Clinton supporter but also runs Correct the Record that labels itself as "a strategic research and rapid response team designed to defend Hillary Clinton from baseless attacks."

Schultz dismissed Clinton's big win saying she is vulnerable in many of the upcoming Super Tuesday states on March 1. "I think Bernie is in a great position right now. It's not like he's been rolled in all of these contests. He certainly won New Hampshire. He was expected to lose South Carolina. Seven hundred votes in Nevada. And two-tenths of one percent in and they haven't even officially called it yet."

Schultz let Brock have it calling him out for running the super PAC that Schultz says funnels money into backing Clinton. Schultz continued saying the only reason that Clinton is progressive today is because Sanders is opposing her. He specifically mentioned the Wall Street hedge fund money for Clinton as well as the money from fracking companies. When Brock tried to interject, Schultz continued. Eventually, Brock asked if he could speak, Schultz shut him down, saying simply, “No.”

New discoveries chip away at myths about Viking shipbuilding

In the midst of World War II, with the Nazis extolling their Viking heritage, the Swedish writer Frans G. Bengtsson began writing "a story that people could enjoy reading, like The Three Musketeers or the Odyssey."

Bengtsson had made his literary reputation with the biography of an 18th-century king. But for this story he tried a new genre, the historical novel, and a new period of time. His Vikings are common men, smart, witty, and open-minded. "When encountering a Jew who allies with the Vikings and leads them to treasure beyond their dreams, they are duly grateful," notes one critic. "Bengtsson in effect throws the Viking heritage back in the Nazis' face."