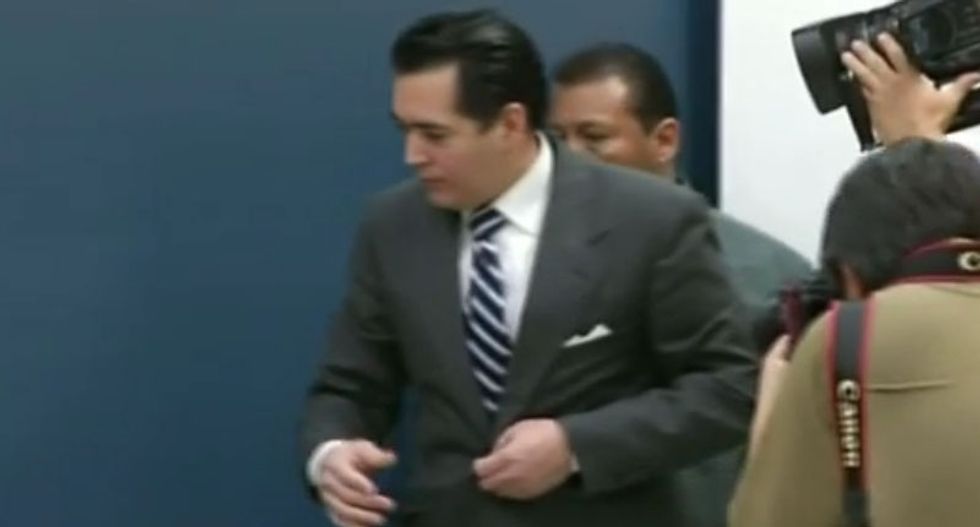 The mayor of the south Texas town of Crystal City, arrested earlier this month on federal corruption charges, was arrested again by his own police department for unruly behavior at a meeting that sought his resignation, police said on Wednesday.

Ricardo Lopez was charged with disorderly conduct following a chaotic city council meeting on Tuesday night at which citizens presented petitions calling for the mayor, two other council members and the city manager, all of whom were also indicted, to step down.

The meeting was the first since the town that bills itself as "the spinach capital" of the world found that most of its leaders had been indicted in the federal probe. U.S. prosecutors charged the officials with dipping into city coffers for their own personal gain.

Lopez posted bail on Wednesday and left jail, telling reporters he had no intention of attending future city council meetings.

"Don't care who the mayor is. Don't care if I'm the mayor. I'm not going to another council meeting. Because I don't want to be put in jail again," he said.

He did not say whether he intends to resign.

Witnesses said during Tuesday's council meeting, Lopez tried to dispute calls for his resignation, yelled at spectators and left to fetch a copy of the city charter. When he returned, pushing and shoving ensued between Lopez and angry citizens, and the mayor was arrested, police said.

Lopez, two other council members, and the city manager were indicted on Feb. 4. They were charged with collecting bribes from city contractors for permits and other favors and using the money to pay off gambling debts, bar tabs and car loans.

They were also suspected of allowing an illegal gambling house to operate in the town of about 7,500 people.

Another Crystal City councilman was indicted in January on charges of smuggling undocumented immigrants.

Crystal City is known for a quirky tourist attraction of a large statue of the spinach-eating cartoon character Popeye in front of City Hall that celebrates the area's history as a spinach producer. It holds an annual spinach festival.