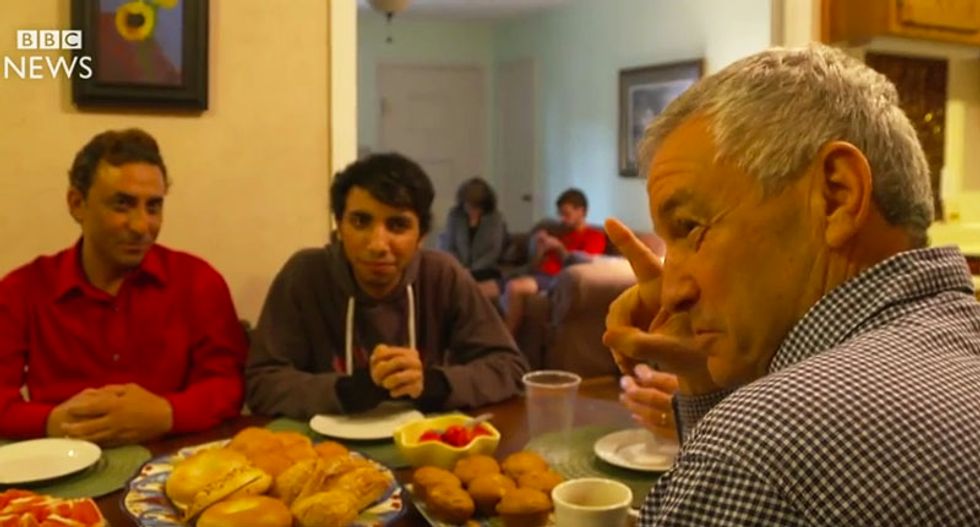 Speaking with a group of Muslim refugees from Syria, a Trump supporter from Alabama attempted to defend the GOP presidential contender's hardline stance on banning more Muslim refugees, saying he was afraid they might bring execution by head-chopping to the U.S.

In a video recorded by the BBC, pastor Jim Mather is shown sitting down with Alabaman Steve Weller and several recent Muslim immigrants and attempting to bridge their differences.

Mather, who is supporter of bringing dispossessed refugees to America, explained that the politics of the moment  has become "poisoned" by  anti-immigrant sentiment.

"The political realm in which we live right now is poisoned, it's deeply toxic," he stated.

"He wants to put a halt to figure out what's going on. That's basically his words. I don't think he really wants to stop people like these folks," he said, indicating two Syrian refugees sitting across the table from him.

Conceding that Trump's comments might be "extreme," Weller worried about the "radical Muslim that infiltrates -- that could be a problem."

Attempting to address his concerns, 19-year-old Syrian refugee Mustafa Khamees, explained that before refugees are accepted into the U.S., their lives are heavily scrutinized by U.S. government authorities.

He then turned to Trump.

"I want to sit down and tell him one thing," Khamees said. "He wants to ban all Muslim People. Islam means peace. Our religion means peace. Our Koran doesn't have anything about killing people or killing anyone. Or being a terrorist."

Weller was not entirely convinced, invoking a "certain segment of your religion that is referred to as 'radical Islam'" before stating his fears that the terrorists will enter the country to do damage.

"The fear is, if it's happening there -- and these people that are chopping heads off over there -- it could happen here," Weller claimed. "And it's gotta be protected before heads start getting chopped off here."

Weller later conceded, "Remember -- there is always a solution."