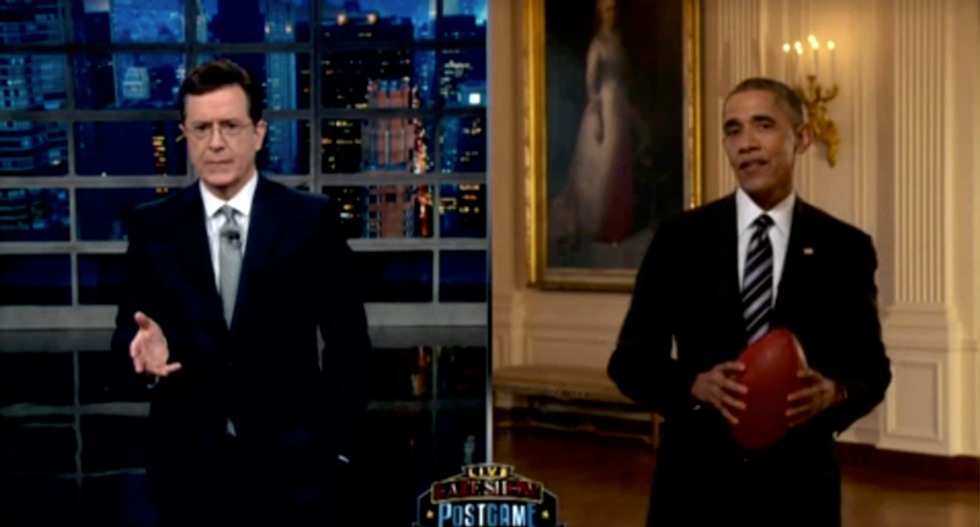 President Barack Obama made a special appearance in Stephen Colbert's Super Bowl post-game show on Sunday night. The segment began with Colbert throwing a football around to people around the globe. First, he threw it to Lt. Col. Christopher Landers and a team of soldiers that are serving in Afghanistan who revealed their 7-Layer dip was made up of salsa and six layers of sand. Next was astronaut Scott Kelly on the International Space Station who tried to throw a spiral in zero gravity. Third was Chewbacca who, Colbert said, would make an amazing lineman. Finally, it was time for President Obama to appear.

The two exchanged a few pleasantries and talked about the game before Obama admitted that the whole thing was pre-taped ahead of time. Colbert said that he was obviously working hard to do a live television show and found it hard to believe that the show was pre-taped. That was until of course Stephen Colbert walked out next to Obama.

Somehow, however, Obama managed to congratulate the correct team for their win. "What?!" Colbert exclaimed. "This was a pre-tape! How could you possibly know that?!"

Obama attempted to throw the ball back but it made a hard left into another room in the White House where it hit the First Lady. She was not pleased asking who was throwing the ball in the White House. Obama pointed to Colbert and slowly backed away. The deadpan was fantastic.