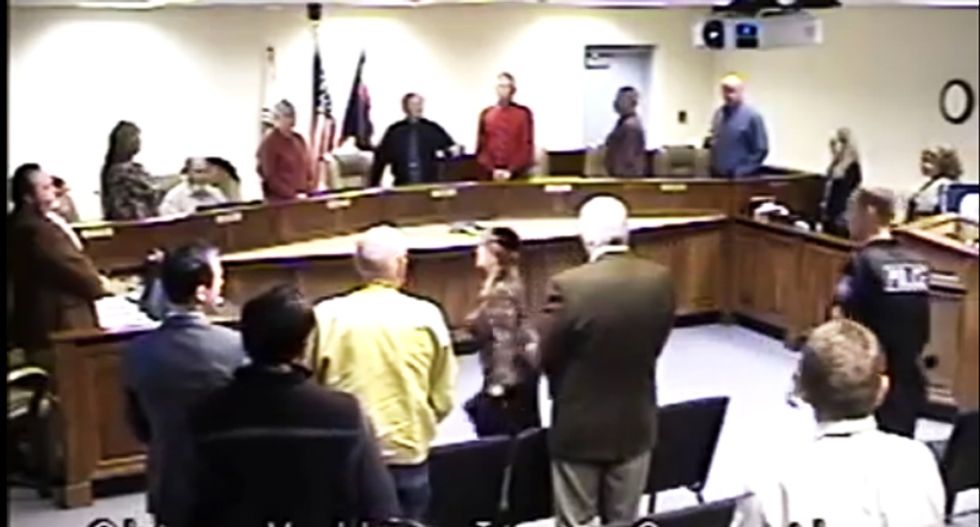 An Arizona rabbi, who was assured that the local town council would stop opening proceedings with a prayer, was booted for a meeting this week by the pastor mayor who changed his mind.

According to the Daily Courier, rabbi Adele Plotkin of Chino Valley's Beit Torah congregation attended Tuesday's meeting after Chino Valley Mayor Chris Marley stated that invocations were on hold until he and the other council members had a chance to discuss them after receiving complaints.

However Marley -- who is a pastor -- said he changed his mind and announced at the meeting that he would do the invocation after hearing from some council members to go ahead with one.

"Unfortunately, the content of the invocations offered here in Chino Valley has become the subject of some contention, so we - your Town Council - will deal with it," Marley said in an opening statement. "Our Bill of Rights protects us against the establishment of religion by the state, and yet it would appear that secular humanism with its mantra of political correctness has become just that, the state established religion which the First Amendment was supposed to protect us against.

Marley went ahead with the invocation, ending with, "I pray all these things in the name of my Lord and Savior, Jesus Christ," leading the diminutive Plotkin to stand up and berate the council who still had their heads bowed.

The mayor then ordered two Chino Valley Police officers, to escort Plotkin -- who pulled her arm away from one of them -- from the council chambers.

He lied,” Plotkin said, explaining that being in the presence of others worshiping Jesus is considered idolatry by her faith --and that she has contacted the American Civil Liberties Union to contest the town's invocation policy.

"Sitting there is giving the impression of acquiescence, so what was I to do?" she said, while explaining her outburst. "I had a near-death experience, and I went through the bargaining phase, and I made a deal with God, that anything He put on my plate, I would run with."

Marley pushed back, saying, "I can't speak for the rest of the Council, but I believe it is time to draw a line in the sand, at least for me it is," before adding that the invocations by council members would continue.

Traditionally, each of the seven council members is granted the right to deliver the invocation.

Six of the seven council members identify as Christian, with one stating no religion, and also passing on delivering an invocation.

Watch video below of Plotkin being removed: