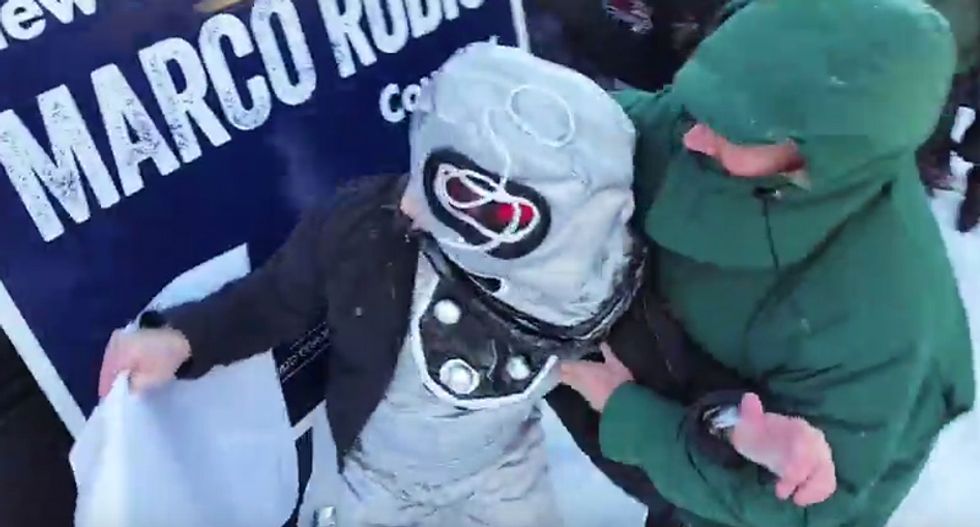 Supporters of 2016 GOP presidential contender Marco Rubio roughed up two protesters in New Hampshire today who were mocking the candidate's performance at a recent GOP debate by dressing up as robots.

Rubio's appearances have been plagued by counter protesters dressed as robots, making fun of his much-derided debate appearance where he repeatedly invoked the same sound bite, leading critics to say he's an over-programmed and "glitchy" robot.

In video posted by Americans United, one man wearing a silvery suit and carrying a sign reading #RobotRubio is slammed with a sign by one Rubio supporter while another supporter of the Republican candidate grabbed him and put him in a headlock.

As supporters chanted "Marco, Marco!" in the background, the two men struggled, as the man in the robot suit can be heard saying, "Why do you have your hands on me?"

Realizing he's being photographed, the Rubio supporter abruptly released his captive as a sound-man appears to tell him, "You better knock that off."

The green-jacketed assailant then mixed back into the crowd of chanting fans and counter protesters, but was seen greeting Rubio when the candidate made an appearance.

On Twitter, another one of the men dressed as a robot posted photos of himself after he was pushed over into the snow: