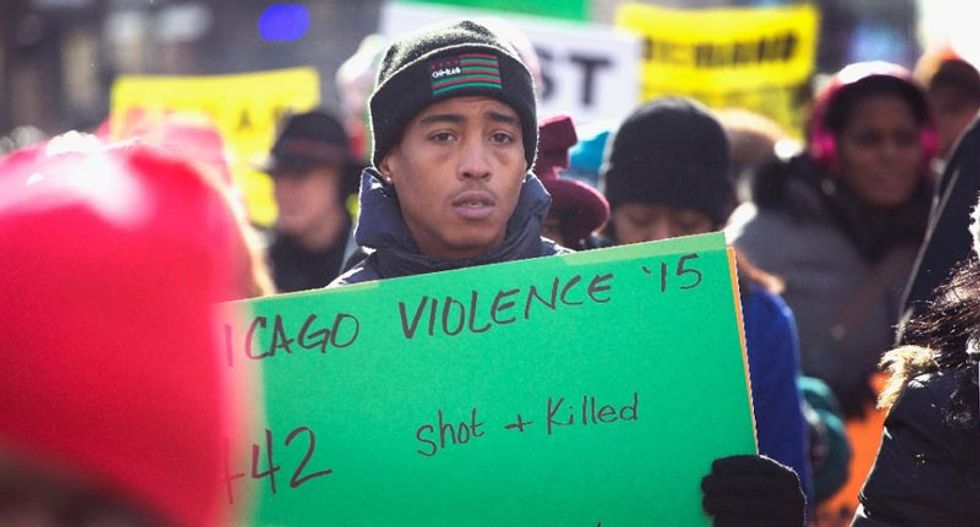 Demonstrators calling for an end to gun violence and the resignation of Chicago Mayor Rahm Emanuel march through Chicago, following the shooting deaths by police of Quintonio LeGrier and Bettie Jones (AFP Photo/Scott Olson)

A white police officer plans to sue the estate of a black teenager he shot dead because he was traumatized by the fact that he accidentally killed the teen's neighbor in the incident, his lawyer said.

"The damage is my client feels horrible that Bettie Jones is dead because of the actions he was forced to take," attorney Joe Brodsky told AFP.

"It's affected him greatly. It's a burden he's going to have to carry for the rest of his life."

The December 26 shooting came as the US city was reeling from a series of incidents in which police were accused of being too ready to pull the trigger.

The family of Quintonio LeGrier, 19, has repeatedly said there was no reason why police should have opened fire when responding to a domestic disturbance at their home. They have sued both the city and the officer who shot him: Robert Rialmo, 27.

A wrongful death suit filed by LeGrier's father, Antonio, argues that the teen "never had possession or control of a weapon" and was not a threat to Rialmo or anyone else at any point.

Rialmo was standing outside when he opened fire on LeGrier, who was inside the building, the lawsuit said. Antonio LeGrier is also suing for wrongful arrest after police made him leave his dying son in order to file a statement about the incident.

City officials have apologized for the death of Jones, a 55-year old mother of five, but have said LeGrier's shooting was justified.

The city has released few details about the incident except to say that LeGrier was brandishing a baseball bat when he was shot after his father called for help in the early hours.

LeGrier, an engineering student who was struggling with mental health problems, had called 911 for help several times earlier that evening but the dispatcher did not send an officer to the house until his father called.

Brodsky said that makes the incident a "double tragedy because if my client had advance knowledge he was dealing with a mentally ill person he may have handled this in a different way."

Police tactics and racism have been the subject of a national debate since protests erupted in Ferguson, Missouri, in mid-2014 over the shooting death of a black teenager, 18-year-old Michael Brown.

The US Justice Department is investigating how Chicago police use force after the death of another black teenager, Laquan McDonald, who was shot 16 times as he was walking away from officers.

Brodsky insists this case is nothing like that of McDonald, an incident caught on camera which sparked mass protest and led embattled Mayor Rahm Emanuel to fire Chicago's police chief and reform the department.

"He didn't kill him like he murdered him -- he shot to save his own life," Brodsky said in a telephone interview.

"Somebody is swinging a baseball bat and they're two feet above you, you're a pumpkin."

Brodsky insists that the outrage which the incident provoked would be muted if people knew the facts of the case.

Rialmo, a former marine who has only been on the force for three years, backed away as LeGrier approached and repeatedly ordered him to drop the bat before opening fire, Brodsky said.

"The round that tragically killed Bettie Jones was a through-and-through," which passed through LeGrier's body before striking Jones, Brodsky said.

"It's not like he shot a spray of bullets. He couldn't see through LeGrier... he didn't know she was there."

Rialmo also showed restraint by only firing six rounds from a gun which has 16 bullets, Brodsky said.

Brodsky said it was also important to note that the lawsuit is in fact a countersuit.

"Something that bothers Officer Rialmo and myself about the way this is going is the family filed the lawsuit before the funeral," Brodsky said.

"It seems like people believe now that if you have a family member killed by a police officer it's the functional equivalent of winning the lottery... ever since the City of Chicago paid $5 million to the McDonald family that seems to be the attitude and it's just crazy."