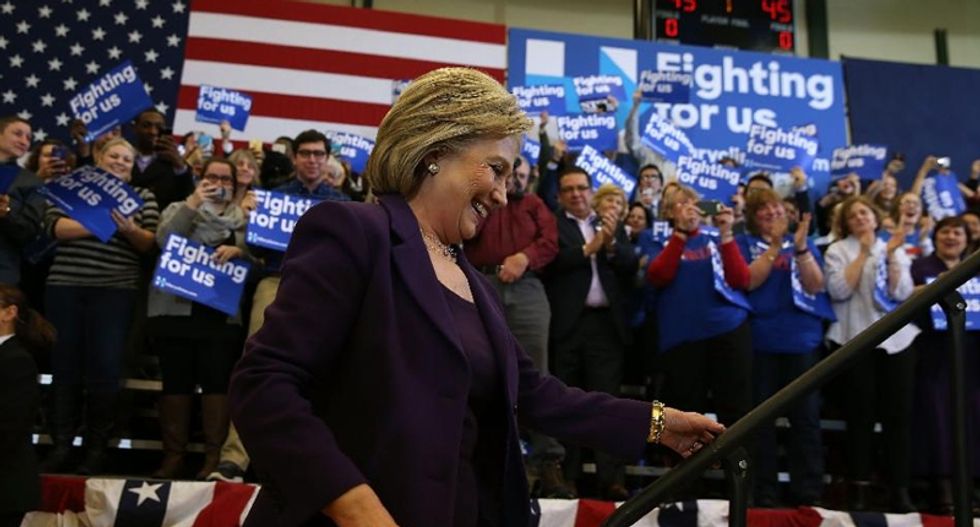 Democratic presidential candidate former Secretary of State Hillary Clinton arrives for a "get out the vote" event at Nashua Community College on February 2, 2016 (AFP Photo/Justin Sullivan)

The White House race picked up speed in New Hampshire on Tuesday after Iowa voters opened the 2016 contest by knocking the showman Donald Trump into humble second place, and Hillary Clinton scraped past a surging Bernie Sanders.

The billionaire real estate mogul whose campaign turned conventional politics on its head also now faces a threat from the telegenic Marco Rubio, who chalked up more than 23 percent to Trump's 24.3 percent, behind the evangelical Cruz on 27.7.

Clinton's razor-thin victory over Sanders -- 49.8 against 49.6 percent -- made clear she too has a real fight on her hands in the form of the Vermont senator and self-proclaimed democratic socialist as the primaries shift into high gear.

But the former secretary of state avoided her nightmare scenario: a repeat of 2008 when she lost Iowa to a rising Barack Obama -- ultimately costing her the nomination.

Before the Iowa tallies were even released, the contenders from both camps were jetting out to New Hampshire which holds its nomination votes a week from now, with Clinton and Sanders, Trump and Rubio holding competing rallies in the state Tuesday evening.

"Make no mistake we are in a fight to the finish," Clinton told supporters upon her arrival -- setting her sights on the trio leading the Republican race.

Party chair Andy McGuire called the final results "the closest in Iowa Democratic caucus history," with several precincts so close they were decided by a coin toss.

"For Clinton, it was clearly a case of surviving and advancing," said Dante Scala, associate professor of political science at the University of New Hampshire.

"That narrow a win -- it's tough to take. I'm sure it's a sigh of relief... because I think a loss would have gone a long way to changing the conventional wisdom about Sanders' ability to win the nomination."

Sanders, who just months ago posed no threat as a fringe firebrand, declared a moral victory for his brand of progressive politics, brimming with confidence as polls give him a double-digit lead in New Hampshire.

Clinton acknowledged on CNN that the 74-year-old Sanders has struck a chord with young Americans on the left with his calls for "political revolution."

"I'm going to have some work to do to reach out to young voters -- maybe first-time voters who have to make a tough decision as they evaluate who should be our president, our commander-in-chief. I intend to do that," she said.

Sanders's camp has not conceded defeat, considering it a tie, and his campaign manager told CNN he hoped to see a detailed breakdown of results in what is a famously complex caucusing process.

"We're not contesting the election," Jeff Weaver told CNN, but "we would love to see some tally sheets.

"There's new technology and room for human error," he added.

Boosted by his showing in conservative Iowa -- where his ground game was second to none -- Cruz rolls into New Hampshire with renewed vigor, having proven that his arch-conservatism may yet propel him to an Election Day victory on November 8.

The 44-year-old Rubio also proved he is a force to be reckoned with after muscling in to challenge Cruz for second place in Iowa -- turning the Republican primary into a real three-horse race.

The 69-year-old showman said he was "honored" to finish second after being given no chance to win Iowa at the outset -- before he began dominating the air waves, thanks partly to a series of controversial remarks on Muslims and immigration.

But David Redlawsk, a professor at Rutgers University who was in Iowa for the caucuses, told AFP Trump was "the big loser" on the night.

A second hiccup -- if his poll lead in New Hampshire fails to translate into votes -- could spell political disaster for the man who built his personal brand on the concept of winning, and has always said being second was tantamount to being nowhere.