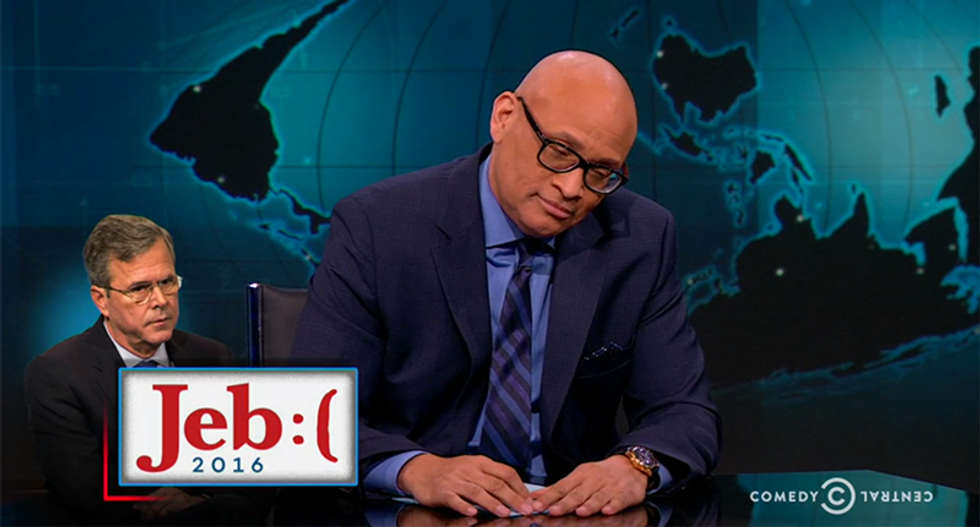 Larry Wilmore said a fond farewell to Republican candidate Jeb Bush on Monday's "Nightly Show." He remembered what things were like just 12 months ago when Bush seemed the inevitable winner and establishment favorite. That is, until Donald Trump taught the GOP that the nurses have lost control of the patients.

It all began with Bush's "doomed from the start" fundraising strategy that one of his supporters actually referred to as "Shock and Awe." The goal was to raise so much money early on, so that no other candidate would be considered viable and it would scare them off. Wilmore explained that it worked about as well as brother George W. Bush's "Shock and Awe" campaign worked in Iraq.

"So, you want people to associate your campaign with one of the greatest military blunders? What was the second choice? Katrina?" Wilmore joked. "Yeah, we're going to make some commercials and flood the airwaves, baby! I'm gonna bamboozle my opponents so bad they're going to feel like black people trapped in the Superdome," he said, going a little too far for the audience's taste.

"Jeb's blindness to his brother's failure was the central problem of his campaign," Wilmore explained. "He never realized his brother's presidency was a disaster that Americans did not want to return to! Seriously! No one!" He said before running a clip of Jeb's mother Barbara Bush saying there have been too many Bushes in office.

But the one thing that made Wilmore miss Jeb! the most was Donald Trump. Wilmore gave Bush credit for "being one of the few adults in the room" who was willing to stand up to Trump's nonsense. His speech in South Carolina last week is an excellent example. Trump's mythical fever dream about killing Muslims with bullets dipped in pig's blood had the fact-checkers racing to their keyboards, but it was just the thing South Carolina's Republican voters needed to hear. "Now, I don't know what's scarier, Trump or the people voting for him," Wilmore said. "I just wish they'd do me one favor: Please stop saying the guy who wants to provide free public education and universal health care is the kookie one."