1968: How Donald Trump channels the spirit of one of America’s most violent years 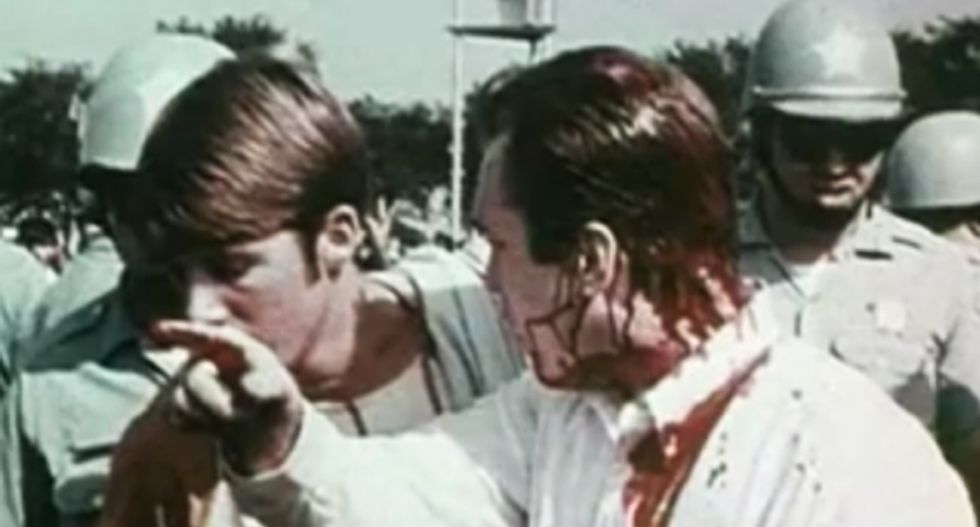 Younger voters were probably the most shocked by the violent televised scenes at Donald Trump’s canceled Chicago rally on Friday – and the photographs of a bloodied demonstrator which speckled the web. But older Americans know that our politics have never been more than a temporary stranger to violence, since the very beginning of the republic.

Related: Feeling the Bern for Trump: Sanders voters who don't have eyes for Clinton

For those with long political memories, Chicago was already famous as the scene of some of the most influential political violence of the last 50 years. As Theodore H White wrote in his Making of the President series : “In 1968 the name Chicago won a significance far beyond date and place. It became the title of an episode, like Waterloo, or Versailles, or Munich.”

When the Democrats held their convention in Chicago in August of that year, at the height of the Vietnam war, at least 10,000 anti-war demonstrators clashed with more than 20,000 policemen, national guardsmen and regular soldiers in the streets of Chicago.

And in an echo of the arrest at the Trump rally of CBS newsman Sopan Deb , in 1968, Chicago mayor Richard Daley’s “security” team roughed up reporters inside and outside the hall.

On the convention floor, CBS reporter Dan Rather was punched and wrestled to the ground by a security agent. Moments later, on national television, Rather apologized to CBS anchorman Walter Cronkite: “I’m sorry to be out of breath, Walter, but somebody belted me in the stomach.”

Of course, the events of 1968 were of a greater scale than those of Friday night. After four days of street fighting, there had been more than 600 arrests. The Medical Committee for Human Rights estimated that it had treated at least 1,000 demonstrators. The Chicago police department counted 192 injured officers.

Democratic senator Abraham Ribicoff of Connecticut used his turn at the convention podium to accuse Mayor Daley of using “Gestapo tactics in the streets of Chicago”. At that moment, the television cameras zoomed in on the Chicago mayor. Daley’s voice could not be heard, but to millions of lip-reading Americans, it was obvious he had replied by screaming: “Fuck you!”

The veteran journalist Haynes Johnson remembered the convention as “a lacerating event, a distillation of a year of heartbreak, assassinations, riots and a breakdown in law and order that made it seem as if the country were coming apart”.

Now, the American political system once again seems to be careening out of control, as Donald Trump actively promotes violence among his supporters – “Knock the crap out of them, would you? Seriously. OK? … I promise you, I will pay for the legal fees.” But it may be useful to remember that we have survived much worse.

In 1968, the assassination of presidential candidate Robert F Kennedy was preceded just two months earlier by the assassination of Martin Luther King Jr, a catastrophe which provoked race riots in 130 cities, requiring 65,000 soldiers and guardsmen to restore order. In Chicago, Mayor Daley ordered his police force to shoot to kill arsonists and “shoot to maim or cripple looters”; in the nation’s capital, fires and looting spread to within two blocks of the White House. Riot troops took up positions on the president’s lawn and machine gun nests sprouted on the steps of the Capitol. The president’s men worried that if the riots spread any further, the federal government would run out of troops to quell them.

But 1968 offers other echoes. On the Democratic side, Minnesota senator Eugene McCarthy played the insurgent role now occupied by Bernie Sanders of Vermont. It was McCarthy’s near-victory in the New Hampshire primary on an anti-Vietnam war platform that convinced Lyndon Johnson not to run for re-election and propelled an initially reluctant Robert Kennedy into the race. The establishment doppler for Hillary Clinton was Vice-President Hubert H Humphrey, chosen to be the nominee by the party establishment even though a large majority of primary voters had gone to Kennedy and McCarthy.

Related: American crossroads: Reagan, Trump and the devil down south

Nixon deduced that many Americans craved a subtle stoking of unspoken prejudice that the riots of the spring had done so much to revive. Agnew was the perfect person to do that. A once liberal Republican, he had transformed his image earlier in the year with a rough response to rioting in his state.

And as Trump has violated standards of decency and civility with his attacks on everyone from Muslims and Mexicans to reporters with disabilities, Agnew was famous for his ethnic slurs, referring to Poles as “Polacks” and calling a Japanese American reporter “the fat Jap”.

Nixon’s selection of Agnew was just one prong of the southern strategy which is the clear ancestor of Trump’s much less veiled prejudices. Journalist Bill Grieder called it “no-fault bigotry”, which Nixon conveyed to voters through strong support for “law and order” and “states’ rights” and persistent attacks on the supreme court, then led by chief justice Earl Warren. All of this was understood as code for allowing southern states to continue to resist school desegregation, a strategy the great liberal cartoonist Herblock later dubbed “all deliberate delay”.

A line runs from 1968 to the present . Ronald Reagan continued this scheme, opening his 1980 presidential campaign with a speech extolling “states’ rights” at the Neshoba County fair, just a few miles from Philadelphia, Mississippi, a town made notorious by the brutal murders of three civil rights workers in 1964. It continued in 1988 with George HW Bush’s television ads demonizing Michael Dukakis for being governor of Massachusetts when black convict Willie Horton committed a series of violent crimes during a weekend furlough from jail.

‘Not a race race’

Related: Pepper spray in Kansas City as Trump vows to press on with rallies

The lineage of Trump’s prejudices is so obvious, any recitation of it in public is guaranteed to produce apoplexy in “mainstream” Republicans. That’s what happened last Sunday on NBC’s Meet the Press , when Detroit Free Press editorial page editor Stephen Henderson began to recall this history, including Reagan’s speech at Neshoba.

“This goes on all the time in coded ways,” said Henderson, who then turned to the ever-eruptive Republican operative Mary Matalin.

“It makes you uncomfortable, too,” he said.

Matalin replied: “No, it doesn’t make me uncomfortable. It just makes me want to choke you!”

Matalin insisted that 2016 was “not a race race”, but Henderson held his ground.

“I think there’s no question that what [Trump] is doing is appealing to race. And Republicans have done that for a long time.”

1968 was also the year that Richard Nixon invented the idea of “the silent majority” – such poorer, less-educated whites are clearly the group on whom Donald Trump is depending to propel him to the Republican nomination.

Demographic trends, though, are the main reason to remain hopeful that Hillary Clinton or Bernie Sanders will be able to stop him reaching the White House. Appealing to white prejudice is clearly a game of diminishing returns; black, hispanic and Asian voting blocs are vastly more important now than they were in 1968. In 2012, with Barack Obama at the top of the Democratic ticket, for the first time there was higher black turnout than white – 66% of eligible blacks voted compared to 64.1% of whites.

Of course, such demographic trends also explain the Republicans’ most anti-democratic impulse: the proliferation of voter ID laws throughout states controlled by GOP governors and legislatures. In the absence of any serious evidence of widespread voter fraud, the only purpose of these laws is the suppression of black and Hispanic voters.

The goal, of course, is to make the voting rolls continue to look as much as possible like they used to – in 1968.

Watch a 1968 Richard Nixon campaign video below via YouTube: