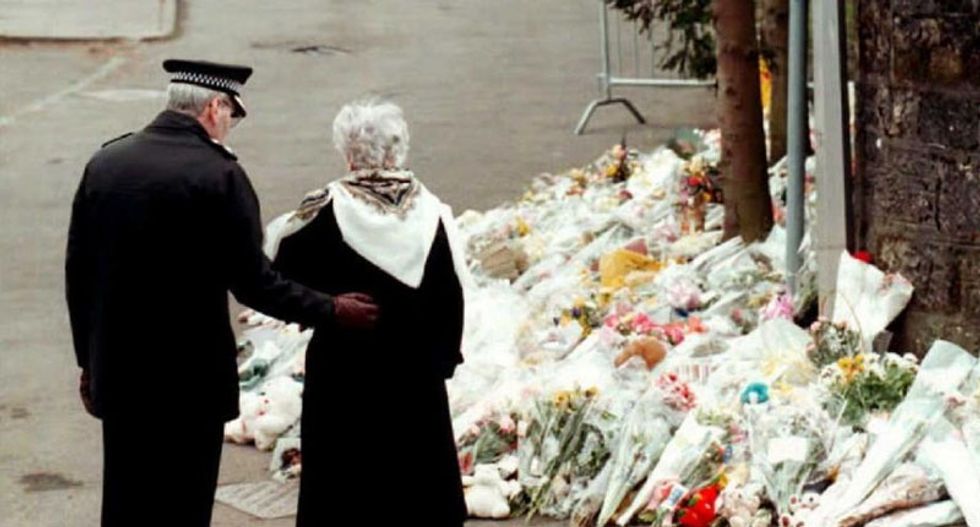 A police officer assits a woman as she stands in front of floral tributes to the sixteen slaughtered primary schoolchildren and class teacher, outside the Dunblane Primary school on March 16, 1996 (AFP Photo/Stefan Rousseau)

As Britain marks the 20th anniversary of a school massacre on Sunday, survivors and victims' families cling to tighter gun control as a positive legacy as the issue swirls in the United States.

The 1996 shooting in the quiet, cathedral town of Dunblane in central Scotland, which left 17 people dead, spurred prime ministers John Major and Tony Blair into introducing some of the world's toughest gun laws.

With the question of gun control featuring in the US presidential campaign, some in Dunblane hope the memory of their loved ones will live on through their successful campaign to ban handguns.

Within four minutes, he had shot dead 16 pupils aged five and six, teacher Gwen Mayor and finally himself. Fifteen others suffered non-fatal injuries.

The massacre horrified Britain and by the end of 1997, following a petition backed by the families that garnered more than 700,000 signatures, new laws effectively made private ownership of handguns illegal.

Nearly 23,000 firearms and 700,000 rounds of ammunition were handed in during a national amnesty.

Then aged eight, Murray and his elder brother Jamie, now a champion doubles tennis player -- who both attended the boys' club Hamilton ran -- hid under a desk in the headmaster's office.

The world tennis number two says he only has patchy memories of the day itself, and was too young to understand what was happening.

He breaks down on the extremely rare occasions he comes anywhere close to speaking about it.

However, in the few words he has managed, he has conveyed how proud he is of the town's strong response to the tragedy.

"I don't want to look back at it," he wrote in his autobiography. "I could have been one of those children."

Dunblane is not planning an event to mark the milestone anniversary; every day is a day for memories, as one bereaved parent put it.

But some have spoken about the change in gun laws and feel that their loved ones are best remembered by upholding strong firearms ownership laws.

Others hope the anniversary will influence the gun control debate in the United States.

Malcolm Robertson, who was at the school and went to Hamilton's boys' club, said the anniversary should be a time to remember how the community held together in the aftermath.

"Let us celebrate too this country's changed relationship with guns (they are for killing people, and nothing else) and hope that common sense eventually prevails in other civilised parts of the world, particularly the United States," he said.

In the United States, gun violence kills around 30,000 people each year but many people vehemently oppose greater firearms control.

In 2013/14 in England and Wales, there were 29 fatalities resulting from firearms offences.

Aimie Adam, who was shot twice, said guns "devastate people's lives" and urged gun owners to give them up.

"Are we and our children now safer from guns? The answer is a definite yes," he said.

Isabel Wilson, whose daughter Mhairi was killed, told BBC television: "For me, it's just desperately, desperately important that they're not forgotten.

"And I think that the best that I can do on behalf of Mhairi is ensure that the UK and Scotland has a sensible attitude towards gun ownership and that we have tough gun laws."

She fears gun ownership may rise, and remains concerned about security at schools.

"Very sadly I think there will be another Dunblane and it will be in my lifetime. I'm very pessimistic about it," she told STV.