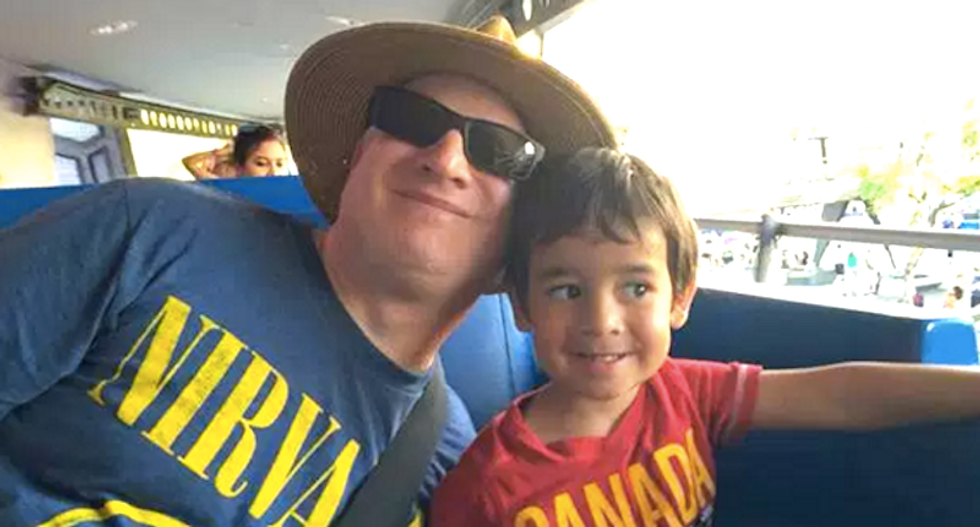 A Toronto man who has albinism was investigated by police after a trip to the movies because bus passengers thought he had abducted his son -- who does not look like him.

Jason Thompson took his 4-year-old son Xavier to see "Zootopia" on Tuesday, but they were targeted for investigation as they went home to play with Lego toys, reported City News.

Another passenger called police after spotting the duo singing "Row, Row, Row Your Boat" as they boarded the bus, and Thompson said the driver suddenly stopped the bus and refused to let anyone get off.

Police boarded the bus and questioned Thompson, asking if the boy was truly his son.

“They were really quiet, really respecting my privacy, and they walked me and my son off the bus," Thompson said. "They told me, ‘We got a call saying something didn’t look right, something was off, because the father doesn’t look like the son.'”

Thompson said he nearly cried at that point.

He has albinism, a genetic defect that prevents the production of melanin, and so does his wife, who is East Indian.

Their son does not, and he has dark skin, hair and eyes, and Thompson wonders if a passenger called police because “they saw this white guy and this brown kid.”

“I could see if I was dragging him, or he was crying, but that wasn’t it," he said. "It feels like there’s something else going on here.”

He said the incident was scary and humiliating.

“I was so dumbfounded, I probably just stood there with my mouth open,” Thompson said. “The officer knew I was offended and said, ‘It’s okay, it’s okay.’ They kept on reassuring me and were very sympathetic and understanding.”

Police quickly realized Thompson was the boy's father, even though they don't look alike, and attempted to reach the passenger who called in the report, but the caller never answered.

Thompson said he had a hard time explaining what had happened to his son, who started crying before police offered them a ride home.

"We get back in the patrol car, we’re heading down the street and my son’s like, ‘This is where the bad guys sit’ and the officer’s like, ‘No, the good guys sit there too,’" Thompson said. “We’re good guys right now.”