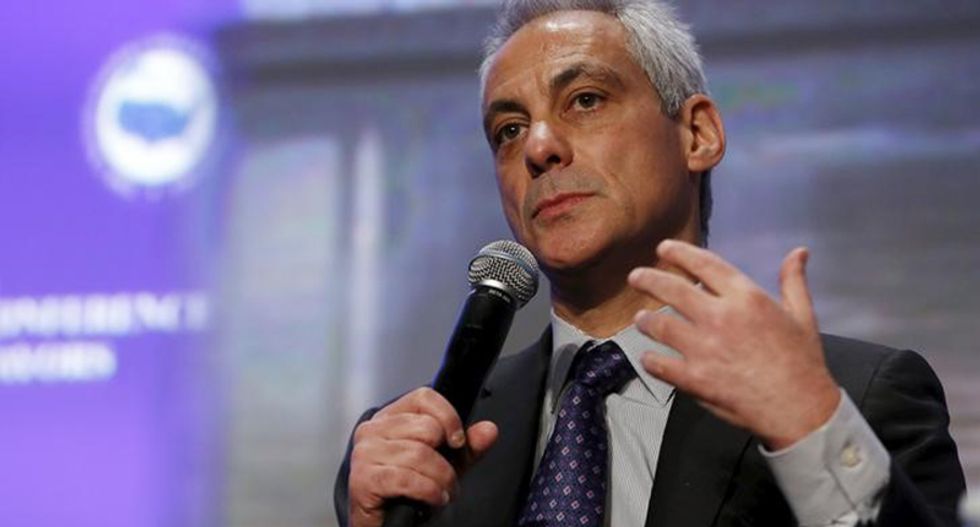 Chicago Mayor Rahm Emanuel participates in a panel discussion on Reducing Violence and Strengthening Policy and Community Trust at the U.S. Conference of Mayors in Washington January 20, 2016. REUTERS/Gary Cameron

Chicago Mayor Rahm Emanuel has rejected three finalists for the job of police superintendent and will name a veteran African-American officer on an interim basis to lead a force rocked by charges of racism, local media reported on Sunday.

Eddie Johnson, who currently serves as chief of patrol and did not apply for the top job, would take charge of the department at least temporarily, the Chicago Tribune reported, citing four unnamed sources.

Emanuel's surprise decision underscores the political sensitivities in naming a successor to Garry McCarthy, who was ousted as superintendent in December after days of protests over a white officer's shooting of a black teenager.

The department delayed for more than a year the release of video footage that led to first-degree murder charges against the officer, touching off outrage and calls for Emanuel's resignation. He has vowed to complete his second term.

Johnson would replace the current interim superintendent, John Escalante, who applied for the job but was not a finalist.

A spokeswoman for the mayor confirmed to the Tribune that Emanuel rejected the three finalists selected by the Chicago Police Board but she would not comment on the choice of Johnson as interim superintendent.

Neither the mayor's office, a representative of the police board nor Johnson could be reached for comment.

The law requires Emanuel to pick a candidate recommended by the board, which winnowed down the list from a field of more than three dozen. According the Chicago Sun-Times, Emanuel would ask the board to conduct a second search after rejecting its first slate of finalists, and presumably Johnson would apply.

Sources told that paper that the mayor is convinced that only a non-polarizing insider such as Johnson could succeed in restoring public trust in the department.

Emanuel's plan drew a rebuke from Rev. Jesse Jackson, the civil rights leader who has been a vocal critic of the mayor's handling of the crisis triggered by the video of the shooting of 17-year-old Laquan McDonald.

"By circumventing the long established procedure for picking the city's top cop, Mayor Rahm Emanuel has loaded Chief Johnson down with baggage that reeks of backroom deals," Jackson said in a statement.

The police board held public hearings on a new superintendent at which many Chicagoans said they wanted an African-American as the new superintendent. At the packed meetings, many expressed concerns about racism on the force and slow and ineffective discipline after police misconduct.

Of 405 people shot by Chicago police over the past eight years, 74 percent were black. The city's population is roughly one-third black.