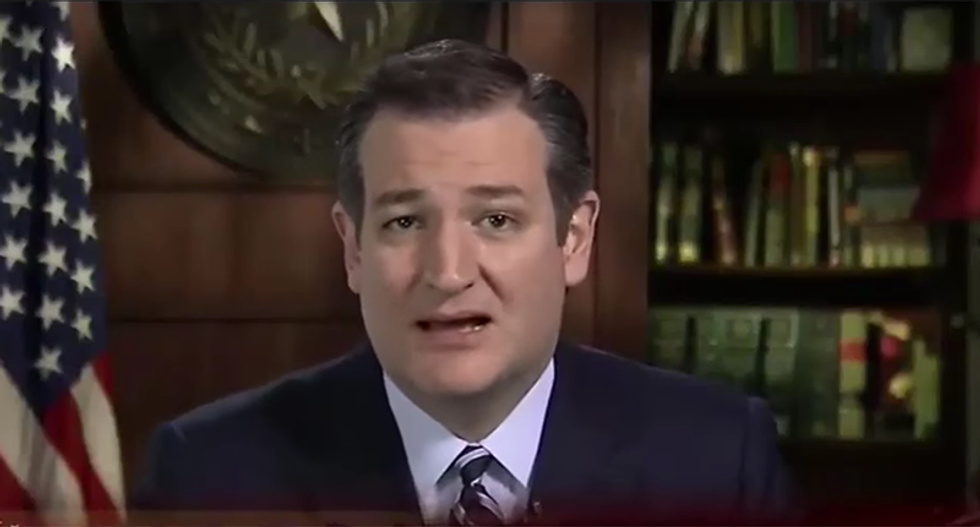 “And as we remember the gift of salvation on Good Friday and Easter Sunday, let us be so bold to ask the same,” Cruz said in a statement on Good Friday. Yet, on Easter Sunday, Cruz was singing a different tune, doubling down on his desire to "carpet bomb" the Middle East.

Fox's Shannon Bream played a clip of former Sec. Hillary Clinton criticizing Cruz for his bomb-everyone-ask-questions-later foreign policy strategy, saying that the plan shows Cruz would be in over his head. Bream cited a CNN poll out earlier in March showing Cruz ranking fourth when it comes to America's confidence in leadership on foreign policy. "So, as a first-term senator, as the secretary suggested, are you in over your head on foreign policy?" she asked.

Cruz's first tactic was to blame the Obama administration, and Clinton along with it, claiming the United States has abandoned its allies. "This has been the most anti-Israel administration we have ever seen. And we have shown weakness and appeasement to our enemies," Cruz said. He then attacked President Obama for visiting Cuba and working to lift the embargo on the country before criticizing the current anti-ISIS strategy.

"But we need a president who will bring the full force and fury of the United States of America to defeating ISIS," Cruz continued. "Shannon, I’ll tell you, if I’m president, we will utterly and completely destroy ISIS. We will carpet bomb them into oblivion, using overwhelming airpower. We will arm the Kurds on the ground. We will use our forces to defeat them and we won't put our forces in combat with the rules of engagement that Obama is so fond of that tie their arms behind their back that make it impossible for them to fight and win. That is wrong and that is immoral.

"If and when we use military force, we will use it to win, to defeat our enemies with overwhelming force and then we’ll get the heck out. We won't engage in nation-building, but rather, we'll keep America safe," Cruz concluded.

In January, a Fox News host attacked Cruz for his "carpet bombing" strategy claiming it showed he had zero military understanding or experience.

Host Chris Wallace cited former commandant of the U.S. Army War College, Robert Scales, who argued that carpet bombing was “just one of those phrases that people with no military experience throw around.”

As Army Lt. Gen. Sean MacFarland, the general in charge of the campaign against the Islamic State in Iraq and Syria (ISIS) explained, "Indiscriminate bombing, where we don't care if we're killing innocents or combatants, is just inconsistent with our values."

"And it's what the Russians have been accused of doing in parts of northwest Syria," he said explaining why Cruz's strategy was wrong. "Right now we have the moral high ground, and I think that's where we need to stay."

"At the end of the day, it doesn't only matter whether or not you win, it matters how you win," he continued. "And we're the United States of America and we have a set of guiding principles and those effect the way we as professional soldiers, airmen, sailors, Marines, conduct ourselves on the battlefield."