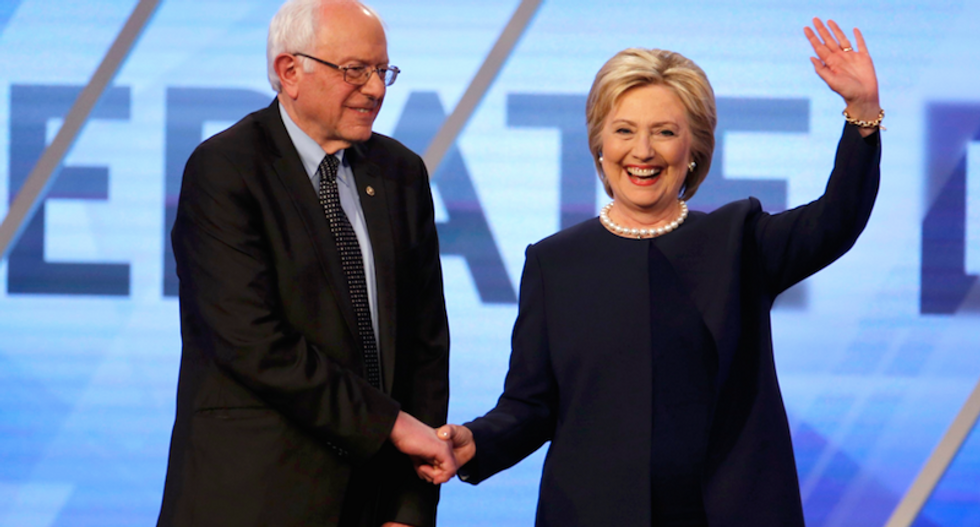 Democratic presidential candidates Hillary Clinton and Bernie Sanders sparred over immigration at a debate on Wednesday night, days ahead of a crucial nominating contest in Florida, but directed their strongest fire on Republican front-runner Donald Trump.

Clinton and Sanders, competing for Hispanic votes next Tuesday in a state where about one-fourth of the population is Latino, promised to deport only illegal immigrants with criminal records and not to deport children.

In the event hosted by Spanish-language network Univision and carried on CNN, they took turns repeatedly ripping into Trump for his remarks about Mexicans and his pledge to deport all illegal immigrants living in the United States.

“Look, in this country, immigration reform is a very hot debate," said Sanders. "I would hope very much that as we have that debate, we do not, as Donald Trump and others have done, resort to racism and xenophobia and bigotry.”

“His idea of suddenly one day or maybe a night rounding up 11 million people and taking them outside of this country is a vulgar, absurd idea that I would hope very few people in America support,” the U.S. senator from Vermont said.

Floridians will vote next week in Democratic and Republican primaries in a state rich in the delegates that candidates need to become their respective parties' nominees to run in the November presidential election.

Florida, with its preponderance of Cuban-Americans and Latinos from other countries, has recently seen an influx of Puerto Ricans fleeing the U.S. island commonwealth's economic downturn.

Sanders and Clinton, a former U.S. secretary of state and U.S. senator, spent much of their second debate this week currying the favor of Florida's Latinos, and that of the Hispanic audience watching nationwide.

Both promised to take a less aggressive approach than President Barack Obama’s administration toward deportation.

Said Clinton, “I think it's important that we move to our comprehensive immigration reform, but at the same time stop the raids, stop the roundups, stop the deporting of people who are living here doing their lives, doing their jobs, and that's my priority.”

Sanders and Clinton said they would carry forward Obama’s executive actions granting relief from deportation for parents of children born in the United States and for children brought into the country illegally. Both said they supported creating a legal path to citizenship for those immigrants.

Last year, Trump enraged Hispanic activists by labeling Mexicans criminals and rapists when he announced his campaign, and continued making inflammatory comments, including proposing a temporary ban on Muslims entering the country.

Asked by moderators point-blank if Trump is a racist, Clinton replied, “His rhetoric, his demagoguery, his trafficking in prejudice and paranoia has no place in our political system.”

For Sanders, it was his first clash with Clinton since his surprise win on Tuesday in Michigan’s primary. He crowed that some had called the victory “one of the major political upsets in modern American history.”

The 74-year-old senator won most of the delegates up for grabs in Michigan, but Clinton, who won Mississippi on Tuesday, still leads Sanders with 1,221 delegates to his 571.

While Florida is next Tuesday's biggest prize, contests will also be held in other states heavy in delegates: Illinois, North Carolina and Ohio.

In the two-hour debate, Clinton, 68, deflected an unusually large number of tough questions about her record as secretary of state under President Obama.

At one point, moderator Jorge Ramos asked her if she would drop out of the race if she is indicted in the Justice Department's investigation into her use of a private email server while running the State Department.

"Oh, for goodness," Clinton replied, visibly frustrated. "That's not going to happen. I'm not even answering that question."