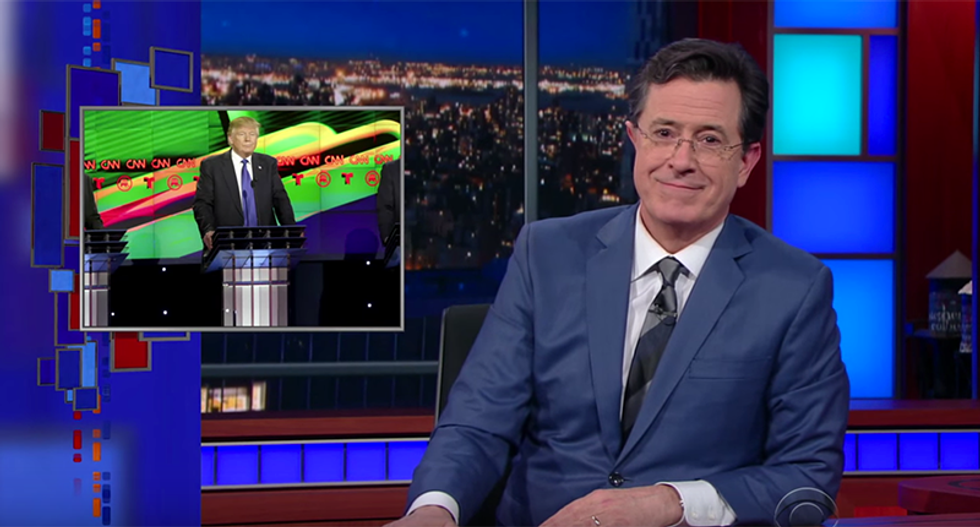 Stephen Colbert was merciless on Tuesday's "Late Show" when he talked about how crucial Super Tuesday is for the Republicans still left in the race. Perhaps that is why they were all a little testy during the last debate.

Colbert said that Donald Trump won hands down, but that's according to Donald Trump. "Just look at this tweet," Colbert said reading Trump's post-debate victory lap. "Wow, every poll said I won the debate last night. Huge honer," Colbert said mocking Trump's misspelling of honor. "Now, I have no doubt Trump had a raging honer. Thank God he was standing behind a podium at the time."

But regardless of who won, Colbert said that it was America who lost. "It was like ultimate fighting but without the satisfaction of seeing any of them get kicked in the face. It got so bad at one point, and this is true, that CNN's closed captions for the debate just said 'unintelligible yelling.'" Colbert reassured the hearing impaired that they didn't miss anything because "unintelligible yelling" is pretty much what you get when Trump's the only guy talking.

Meanwhile, Marco Rubio is fighting for his political life after losing every Super Tuesday state, including his own. In campaign stop after campaign stop, he's attacking Trump's hair, his spray tan, the fact that he asked for a full-length mirror, probably even his mother. But insult comedy is a "time-honored political strategy," Colbert said. "Who can forget the Gettysburg Address when Abraham Lincoln famously decreed, 'General Lee's mother is so fat, we could keep the Union together with one of her belts.'"

Rubio is going so hard against Donald Trump, Colbert called it "full-Rickles." Rubio even joined the scores of comedians making fun of Trump's small hands which Larry Wilmore has named as his chief comedy crusade. Feeling self-conscious, Colbert put on a pair of monster hands and said that Rubio had gone too far.

In other news, in 1969, Hillary Clinton had a cat named after the Egyptian Goddess of health, marriage and wisdom, whose name happened to be Isis. Naturally, a Politico reporter uncovered this not-so-crucial news to help give the right-wingers on the internet something new to create conspiracies around. While Colbert was dismissive of the claim, he did say that ISIS and cats have a lot in common. For one, they make a lot of propaganda videos that are posted on YouTube and they both poop in the sand.