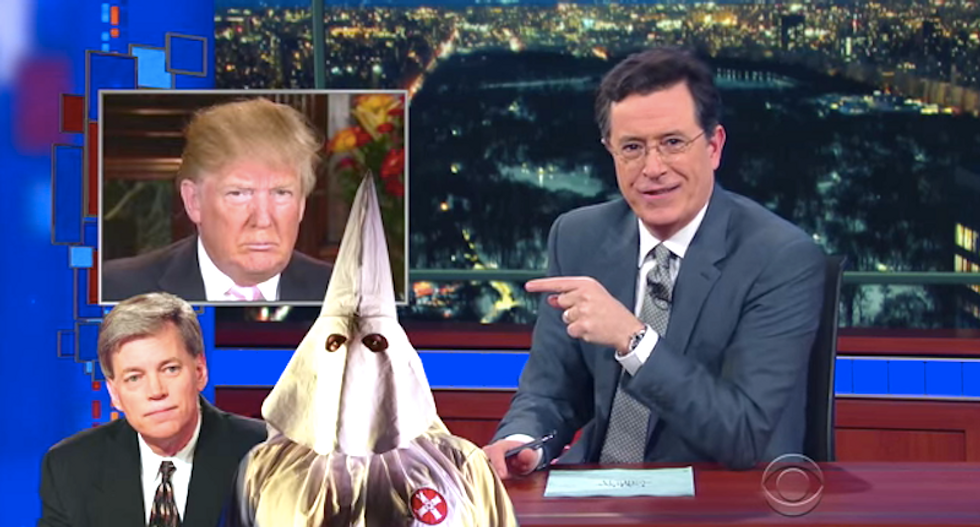 Stephen Colbert said Donald Trump failed the easiest political test of all when he fumbled a chance to disavow the Ku Klux Klan and arguably its most famous former leader.

The Republican presidential candidate told CNN's Jake Tapper that he would need to do more research on the KKK or its former grand dragon, who said he's backing Trump in the election.

"Trump needs to know before condemning David Duke or the KKK -- it's not like they're Muslim or born in Mexico," Colbert said.

The "Late Show" host said he'd previously offered advice to Hillary Clinton on admitting to accusations of lying by apologizing -- which Colbert said was "the easiest question in politics."

However, Colbert said he was wrong to say that.

"This is the easiest question in American politics," he said, pointing to onscreen graphics of Duke and a hooded Klan member. "When someone asks you, do you disavow the Ku Klux Klan, just say yes and start high-fiving your future cabinet."

Colbert said he could understand waiting until the end of the sentence before disavowing anyone, but he said an interviewer needs only to reach "Ku Klux" before a candidate can safely issue a condemnation.

"You know what's coming next," he said. "It's not going to be Ku Klux Crispies or Ku Klux Crunch Wrap."

Colbert said the real estate tycoon and reality TV star later offered an excuse for his hesitation, blaming a "very bad earpiece" for a misunderstanding of the question.

"He blames this one on the earpiece, but I think he should take some responsibility for the mouthpiece -- also, maybe the hairpiece," he said.