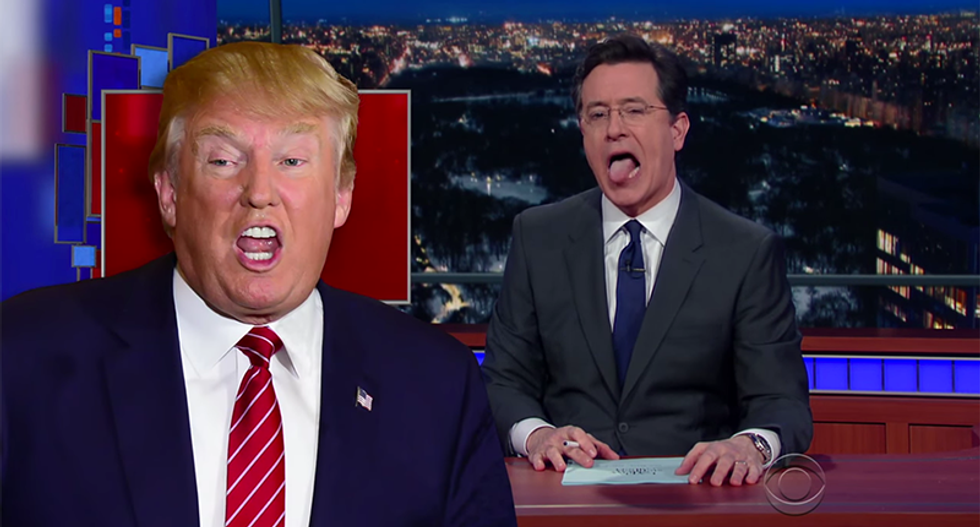 Super Tuesday has come and gone and the voters on the right spoke loud and proud when they said, "blahahahlahlah lah lah lah," Stephen Colbert said speaking in tongues next to a photo of Donald Trump on Wednesday's "Late Show."

While Trump swept most of the states, Ted Cruz managed to win a few states, what Colbert called Texas, Diet Texas and Snow Texas (Oklahoma and Alaska). It put a damper on Marco Rubio's attempts "to be the final candidate through Donald Trump's digestive track," Colbert joked.

Winning just one state is exactly what Rubio wanted. Colbert played a clip of the establishment's new favorite claiming he never expected to win any Super Tuesday states. "I mean, Rubio was just asking voters if they wanted to see a movie this weekend.  When they said no he said, 'Good, I didn't want to either, I hate movies. Wow. We have so much in common. You wanna go to the movies?'"

The goal of not winning last night was most achieved by Ohio Governor John Kasich, who explained to Fox News that it was never really anything they thought was "going to be some great thing" for the campaign. "It's never going to be a great thing," Colbert said shrugging. "You thought we wanted to win? It's only 13 states, man, let those square candidates fight over who wins and becomes president," Colbert said using a lot of air quotes. "Kasich still has a path to the presidency. Just take a White House tour, sneak into the Oval Office, lock the door and claim squatters rights."

"Traditionally, when a clear nominee emerges, the party rallies behind him," Colbert said. But with Trump taking a clear lead, nothing could sum up the establishment's thoughts better than the face of Chris Christie. Colbert called it a "joyous and energetic introduction" but Christie really appeared to be the best man at a wedding giving a speech about the bride he wanted to be with. "I'm happy for you, and the groom agreed to pay off my campaign debts." After giving the most solemn speech with the most epic awkward pause in history, Christie stood behind Trump seemingly sad and confused.

See the rest of Colbert's Super Tuesday wrap-up below: