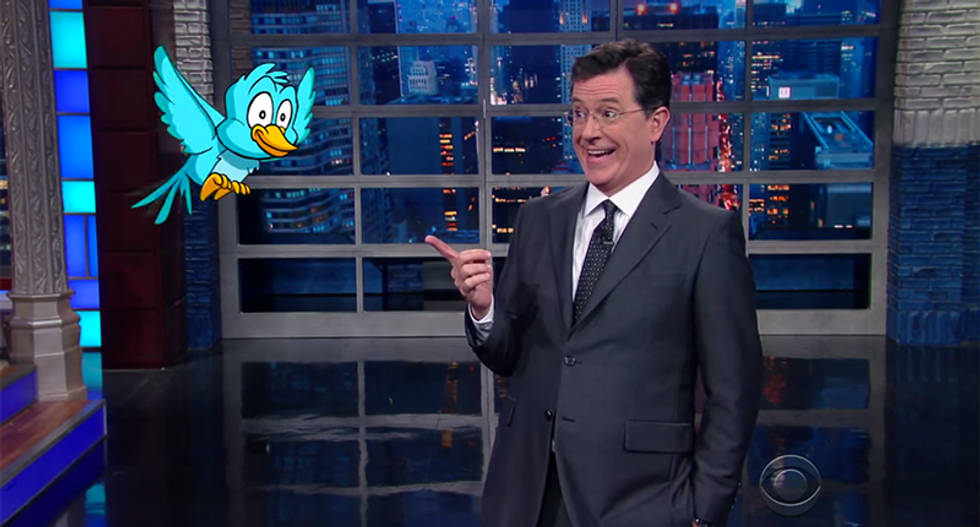 Stephen Colbert has a little bird too (Screen capture)

On Friday, Mother Nature weighed in on the Democratic primaries when a bird landed on the stage and then the podium at a Bernie Sanders rally in Portland, Ore. "What are the odds that a bird would be attracted to an old man who looks like he has bread in his pockets?" Stephen Colbert joked on Monday's "Late Show."

While many have argued that it is some sort of sign, Sanders' avian powers may not be so unique after all. Stephen had his own bird as a "Late Show" guest. "It is spring, birds are everywhere — in fact, I've got a bird right here in the studio who's going to help me sing a happy song about spring."

Stephen hoped that the bird would join him in a musical number, but the bird had his own agenda he needed to discuss. "But first, I want to talk to you about America's vanishing middle class." Stephen asked if he was the bird that landed on the podium but the bird was quick to say no, offended that all birds look the same to Stephen.

"How about we sing about how one percent of birds at America's parks get 99 percent of the bird seed," the bird said about the disparity of food for birds who can afford to live in some of the nicest places in America. "You know far too many birds in America cannot even afford food to regurgitate into the mouths of their young. Join the revolution! #FeelTheBird!" `

One would think he would vote for Sanders, but it turns out the bird is a Trump supporter because Trump will provide a nest for the bird's family in his hair.