'Consensus nominee' Merrick Garland has been praised by Republicans 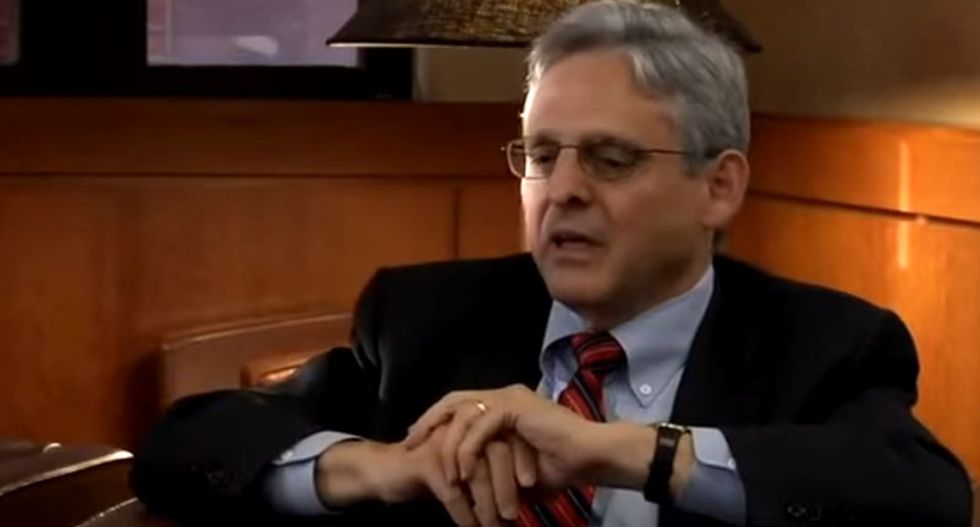 Merrick Garland, the federal appeals court judge picked by President Barack Obama for the Supreme Court, was twice before considered as a nominee for the lifetime job as a justice but passed over when Obama chose Sonia Sotomayor and Elena Kagan.

Garland, 63, has been a judge on the U.S. Court of Appeals for the District of Columbia Circuit since 1997 and previously served in the Justice Department under Democratic President Bill Clinton.

Garland has won praise in the past from Republicans and Democrats and is viewed as a moderate whose legal approach was shaped by his lengthy career as a federal prosecutor.

Garland was selected on Wednesday to replace conservative Justice Antonin Scalia, who died on Feb. 13.

On the bench, Garland is polite to lawyers before the court and does not dominate oral arguments, but is known for asking insightful questions. His written opinions are thoughtful and have not attracted controversy. Lawyers who appear before him say he they view him as fair-minded and not ideologically driven.

Garland was appointed to the appellate court by Clinton and confirmed by the U.S. Senate in a 76-23 vote. He has been chief judge of the court since 2013. That court has served as a launching pad to the Supreme Court for several justices including Scalia in recent decades.

Obama considered appointing Garland to the nation's highest court in 2009 and 2010 but he opted instead for two women, Sotomayor and Kagan. Administration lawyers believed during those episodes that Garland might later serve as a compromise choice if a vacancy opened in an election year and Republicans controlled the Senate. That is precisely the current situation.

In 2010, Utah Republican Senator Orrin Hath, a senior member of the Senate Judiciary Committee, described him as a "consensus nominee" who would "get a lot of votes."

But Senate Republicans including Hatch have vowed not to hold confirmation hearings or an up-or-down vote on any Supreme Court nominee put forward by Obama. They want the next president, who takes office in January after the Nov. 8 election, to make the selection.

Before joining the Washington appeals court, Garland served as a senior Justice Department official and, before that, as a prosecutor and a lawyer in private practice with the Arnold & Porter firm.

His supporters often cite his role in the investigation of the 1995 bombing of a federal building in Oklahoma City in which 168 people were killed as an illustration of his qualities as a lawyer.

Jamie Gorelick, the No. 2 Justice Department official at the time, said in an interview Garland immediately asked to go to Oklahoma to oversee the case.

"When the bomb went off in Oklahoma and we started to see the children being pulled out of the wreckage, Merrick, who had young children at the time, was so moved by this and so angered by it he asked if we could send him out to Oklahoma to help," Gorelick said.

He was there for several months, ensuring the prosecution was done by the book so that the case was "a showcase for the rule of law in the United States," Gorelick said.

Garland showed himself to be a superb lawyer with impeccable judgment and integrity and someone who could work collaboratively, she added.

He was involved in other high-profile cases during his time at the Justice Department, including the prosecution of so-called Unabomber Ted Kaczynski.

His background as a prosecutor has shaped his views as a judge, lawyers who practice before the appeals court said. Garland is viewed as less defendant-friendly than other Democratic appointees.

But Garland is not afraid to rule against the federal government. In 2013 ruling he was part of a three-judge panel that ruled against the Central Intelligence Agency in its bid to keep documents secret concerning the use of armed drones.

In 2008, he wrote on behalf of a three-judge panel when the court ruled in favor of a detainee held at the U.S. naval base at Guantanamo Bay, Cuba. Garland wrote that a U.S. tribunal was wrong to find that detainee Huzaifa Parhat, an ethnic Uighur from China, was an "enemy combatant."

Garland voted in 2014 to uphold an Obama administration air pollution rule that limits emissions of mercury and other toxic pollutants. The Supreme Court in June 2015 threw out that decision, although the regulation remains in place.

Originally from Chicago, Garland graduated from Harvard Law School, from which Obama later earned a law degree. He served as a clerk for liberal U.S. Supreme Court Justice William Brennan.

He spent most of the 1980s in private practice before joining the U.S. attorney's office in Washington in 1989 as a career prosecutor. He briefly returned to private practice in the early 1990s before taking his first political appointment in the Justice Department in 1993.

Garland is married and has two adult daughters.