Could Cthulhu trump the other Super Tuesday contenders? 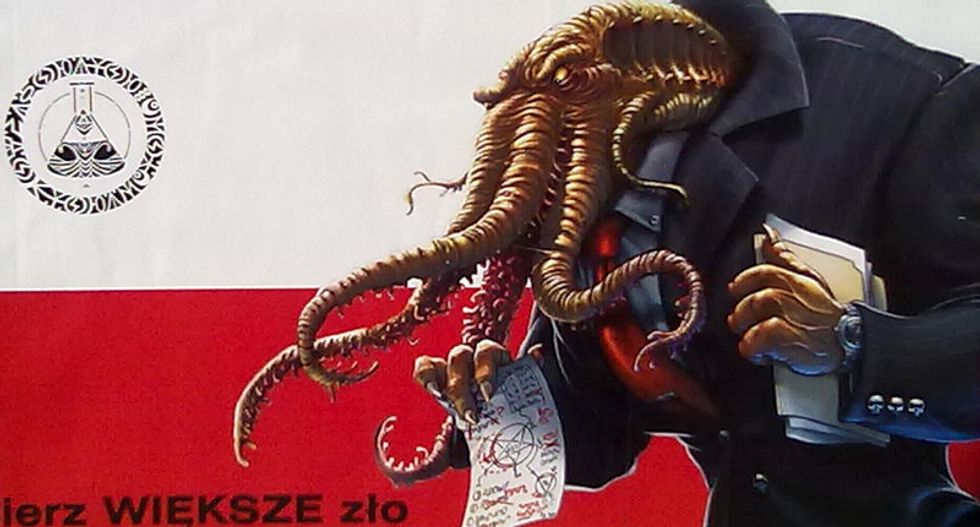 mighty bruiser is rising in the US presidential race, aiming to lead the country into ‘a new golden age of mass sacrifice and unmentionable horror’

If you thought Donald Trump in the White House was your worst US presidential election nightmare, think again: none other than HP Lovecraft’s slime-encrusted cosmic horror Cthulhu is running in the 2016 election .

But what do voters need to know on this Super Tuesday about the tentacled candidate who aims to blow open the two-party race? The aspiring leader has a usefully informative website for those interested. Here we learn that like the current Oval Office incumbent, Cthulhu – who is standing on the “eldritch horror” ticket – hails from an island in the Pacific. It’s not Hawaii, though: it’s R’lyeh, the lost sunken city where, according to Lovecraft, Cthulhu waits to take control of the world.

And there’s no point asking to see his passport … millennia-old Cthulhu predates such bona fides. In fact, he predates countries. And people. So why the US – and why now?

I tracked down his campaign manager Eminence Waite to find out. “His influence on US history is subtle but potent; from stock market crashes to rising global tensions. He has been a part of our nation from its inception,” Waite says. “His presidential campaign is about unleashing an unending wave of insanity. He has selected the US population as his chosen people and he will lead them to a new golden age of mass sacrifice and unmentionable horror.”

Related: HP Lovecraft: the writer out of time

What do we know about Cthulhu? Most people think this cosmic deity was the invention of troubled writer Howard Phillips Lovecraft in the 1928 story Call of Cthulhu, but Waite insists that Lovecraft merely “widely exposed to the modern world” Cthulhu’s existence, rather than simply making him up for a ripping pulp yarn.

Here’s what Lovecraft had to say about Cthulhu: “A monster of vaguely anthropoid outline, but with an octopus-like head whose face was a mass of feelers, a scaly, rubbery-looking body, prodigious claws on hind and fore feet, and long, narrow wings behind.” In a media-driven age when image is everything, Cthulhu is perhaps not the most obvious contender – but he appears to have a solid, if rather colourfully-monikered team behind him as the campaign goes into overdrive.

Campaign manager Waite is no stranger to world-spanning conspiracies, if her claims of previous postings at the World Bank, the IMF and the shadowy Bilderberg Group are to be believed; coincidentally she shares a surname with the characters Asenath and Ephraim from Lovecraft’s short story The Thing on the Doorstep. Meanwhile press secretary Samir Al-Azrad claims to be descended from the author of the dreaded tome the Necronomicon, allegedly written in the eighth century and detailing the pantheon that includes Cthulhu, while Alice Carter and Randolph Brown, heading the Californian and Texan campaigns respectively, bring to mind Lovecraft’s recurring character Randolph Carter. Should we be calling shenanigans?

“Many humans are under the impression that the Cthulhu for America movement is a joke candidacy, like Vermin Supreme – a way for people disgusted by a political system that has long since perished to voice a vote for a greater evil to end the status quo and the world,” says Eminence Waite, sighing in a way that makes you think she’s been asked this question many times before. “They have never been so wrong, yet so right. Cthulhu is no joke.”

Why is one of the Great Old Ones running for president? “I’m running because everyday Americans and their spawn need a demagogue,” Cthulhu says, “and I want to be that demagogue. I want families to do more than just get by — I want you to get a head and consume it for nourishment.”

Aside from general insanity and chaos, does Cthulhu have any actual polices? Well, it turns out he does. Among them are the Obamacare-challenging Equality Through Insanity programme; decriminalisation of drugs to “end the war on mental exploration”; the legalisation of human sacrifice (“As president, Cthulhu will eliminate these barriers to worship and grant true freedom to the faithful.”) Foreign policy aims to lose any conciliatory face: “Peace makes your species weak. If you ever wish to be more than you are and be worthy to serve, flex those angry monkey muscles.”

Cthulhu has some policies that are surprisingly liberal given the whole mastery of the world bit. He “disdains the incompetence and inefficiency of global corporations” and has branded the 1% “a soft, greedy bunch of children”. As for the faithful cultists and minions of Cthulhu, he promises there will be Universal Health Control “from cybernetic surgery to genetic therapy” and even reanimation after death.

“Cthulhu for America is the latest grassroots-driven presidential campaign for the Great Old One to control the most powerful nation on Earth,” says Waite. “While America has consistently chosen the lesser evils for decades, the cults that serve Lord Cthulhu are undeterred in their door-to-door efforts collecting hearts and minds … Participating in the American political system is one of many initiatives to create the conditions required for his rising from the depths of R’lyeh to unleash his reign of madness.”

The US goes to the polls on 8 November. Who knows, if the voting goes Cthulhu’s way, maybe the national motto, In God We Trust, has had its day. The question after that will be whether this will fit on a dollar bill: Ph’nglui mglw’nafh Cthulhu R’lyeh wgah’nagl fhtagn (“In his house at R’lyeh, dead Cthulhu waits dreaming”).

The U.S. government will pay out tens of millions as part of an "agreement in principle" to settle lawsuits over the fatal 2015 mass shooting at the Mother Emmanuel AME Church in Charleston, South Carolina.

"These settlements will resolve claims by 14 plaintiffs arising out of the shooting. Plaintiffs agreed to settle claims alleging that the FBI was negligent when it failed to prohibit the sale of a gun by a licensed firearms dealer to the shooter, a self-proclaimed white supremacist, who wanted to start a 'race war' and specifically targeted the 200-year-old historically African-American congregation," the Department of Justice announced Thursday. "For those killed in the shooting, the settlements range from $6 million to $7.5 million per claimant. For the survivors, the settlements are for $5 million per claimant."

Researchers set up an online oracle to help users make ethical decisions, but the artificial intelligence they set up is pretty racist.

The Allen Institute created a machine-learning model called "Ask Delphi," which allows users to input situations or ask questions the AI will "ponder" for a few seconds before giving ethical guidance, but users quickly determined its advice is frequently bigoted, reported Futurism.

Former Sen. David Perdue of Georgia -- one of the earliest promoters of the Big Lie while trying in vain to win reelection in 2020 -- has let it be known that he might launch a primary challenge to Gov. Brian Kemp in 2022.

A Perdue candidacy would center the race right where Donald Trump wants it: on continuing to hustle the Big Lie that the election was stolen in 2020. Kemp is one of Trump's major targets for having not sufficiently supported Trump's insurrection by overturning President Joe Biden's victory in Georgia.