'Cut the mic': CNN's Don Lemon shuts down Trump advocate after she tries to hijack discussion 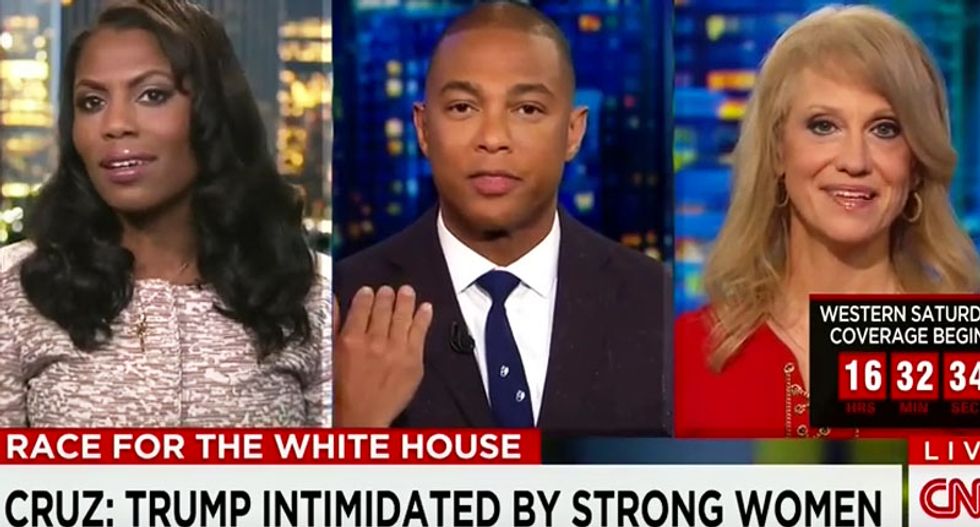 Less than a minute into a discussion on Donald Trump's Twitter war on the wife of Texas Sen. Ted Cruz, CNN host Don Lemon cut the mic of a Trump advocate and went to commercial when she tried to hijack the segment with campaign talking points.

Lemon begin the segment by asking asking former Apprentice star and Trump backer Omarosa Manigualt about the Trump campaign's "over the top" attack on Heidi Cruz on Twitter.

Omarosa began by saying “I don’t think we should start there” and attempted to talk about the Super PAC that ran an ad featuring a cheesecake photo of Melania Trump, only to have the CNN host shut her down.

"Omarosa, stop! Okay, let's stop. Cut the mic" he continued as she tried to talk over him. "We're not doing that. I want everyone on this panel to answer the question directly, and I will let you --"

"You can ask questions, but you can't answer them, Don," Omarosa interrupted, leading to Lemon to cut the segment short with "We'll be right back" before going to commercial.