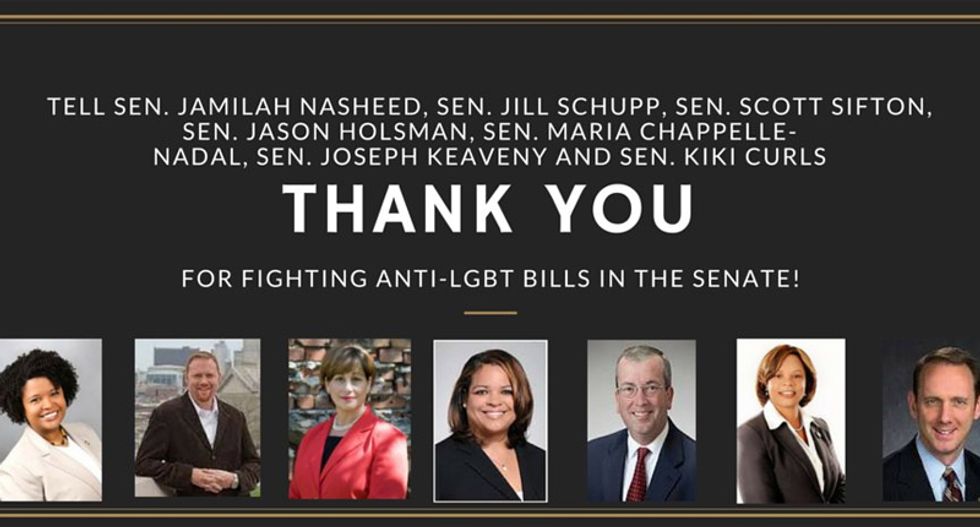 The lawmakers are opposing a bill by State Sen. Bob Onder (R) that would amend the Missouri Constitution to prohibit the government from punishing individuals and businesses that refuse on religious grounds to provide goods or services for marriage ceremonies or celebrations of same-sex couples.

(Live audio of filibuster can be found here)

According to State Sen. Jason Holsman (D), Republican's defense of the bill has a familiar sound.

“A lot of the arguments I’m hearing of proponents of this bill harken back to the same arguments we heard back in 1964 when people were fighting for segregation in Mississippi,” he told the Kansas City Star.

State Sen. David Sater (R) defended the bill, noting the Bible mentions "the abomination of homosexuality," before adding, "“I’m not condemning this type of behavior. I just believe through my religious convictions that it is wrong.”

Sara K Rossi, Director of Policy for ACLU Missouri added congratulations to the senators for their continuing support:

US vows to prevent any Russian invasion of Ukraine

US President Joe Biden said Friday he would make it "very, very difficult" for Russia to launch any invasion of Ukraine, which warned that a large-scale attack may be planned for next month.

Washington and Kiev say Moscow has massed troops near Ukraine's borders and accuse Russia of planning an invasion.

BuzzFeed to go public after raising less money than expected

American digital company BuzzFeed, known for its viral content and journalism, will go public on Monday after it initially raised less money than expected.

In a press release Friday, BuzzFeed said it had finalized a merger with 890 5th Avenue Partners, a special purpose acquisition company (SPAC), which aims to raise funds through an initial public offering to acquire an existing company.

Although now-President Joe Biden enjoyed a decisive victory over former President Donald Trump in the 2020 election, Democrats had their share of disappointments in down-ballot races last year — including centrist Democrat Steve Bullock's loss to Republican incumbent Sen. Steve Daines' in Montana's U.S. Senate race. Bullock, reflecting on the 2020 and 2021 elections, has a warning for fellow Democrats in an op-ed published by the New York Times this week: the Democratic Party has a problem with rural voters, and it isn't getting any better.

Bullock has a track record in Montana politics. Despite being a Democrat in a deep red state, he served as Montana attorney general before serving two terms as governor. But when he tried to unseat Daines in 2020, he lost by 11%.