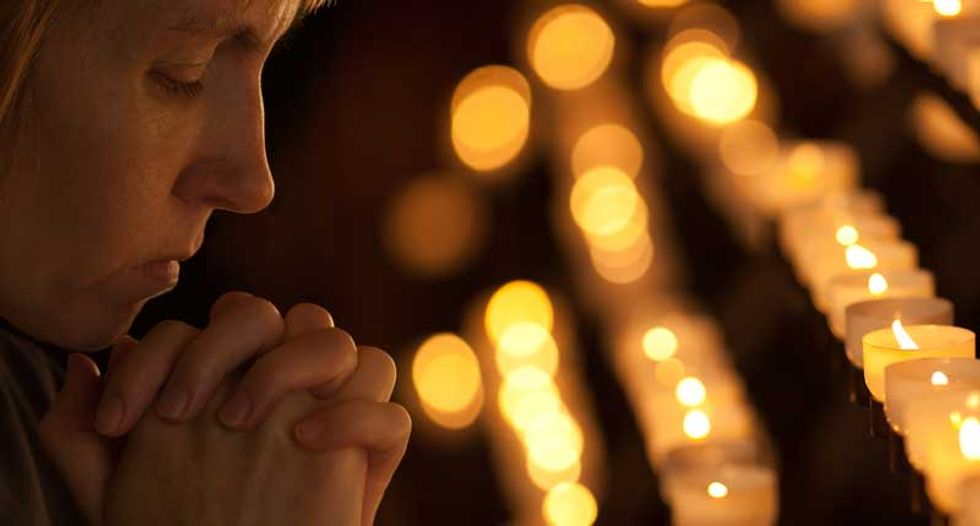 Sonia Guizar used to attend mass regularly and teach at a Catholic school. But her Catholic employer’s refusal to cover birth control brought her an ill-timed pregnancy and a child with developmental challenges that stretch her family thin. When she publically shared her experience and questioned Church teachings in a Washington Post story, what she got from fellow Catholics was a heap of abuse from people whose urge to defend religious dogma and authority trumped their kindness and compassion.

Guizar’s story may be a very distant echo of the horrendous slaughter being perpetrated by Jihadis shouting “Allahu akbar!”—but it is an echo nonetheless. One of religion’s most heinous characteristics is that it elevates defense of faith above compassion, inspiring mean and aggressive behavior in the names of gods.

The American Supreme Court is considering a “religious freedom” claim by a Catholic charity, Little Sisters of the Poor, that wants to deny contraception coverage to employees in their chain of nursing homes—mostly working poor women who can ill afford either out-of-pocket birth control costs or a surprise pregnancy. They further want to block the same employees from gaining access to free contraception via an “opt out” mechanism, a religious exemption already established under Obamacare.

With the case making news and drawing protests, Guizar shared her own experience of needing birth control that she and her husband couldn’t afford. Fearing she would be fired by her Catholic employer if she tried to get the IUD recommended by her doctor, Guizar and her husband tried to make due with “natural family planning” and ended up pregnant. Their son, born from that pregnancy, has developmental delays and requires therapy multiple times weekly, and the whole ordeal has caused her to question her faith.

Her story is both ordinary and heartbreaking, and most people reading it would ache for her. But in dozens of comments, Catholic defenders of the faith saw fit instead to question the legitimacy of her devotion, or her strength or integrity:

There are many morals or themes that could be drawn from Sonia’s story: The incredible human cost of the Vatican’s anti-contraception stance when it leaves families struggling to care for children with developmental issues (think Zika). The fact that a modern IUD or implant (both of which have bonus health benefits) can be life-changing for a woman and her family. The crass dishonesty of any person or institution claiming to be a friend to the poor (or “Little Sister to the Poor) while denying poor families the means to delay or limit childbearing. The fascinating psychology of religion that compels people to lie to themselves and others once they accept a dogma. The fact most American Catholics follow their own conscience and use modern contraception at some point despite Papal edict. The fact that Catholic tradition itself is conflicted about individuals making this decision.

But during a month of jihadist violence—executions in Ivory Coast, a bombing in Brussels and a bombing in Istanbul, all by people who see themselves as defending the one true faith—what strikes me most about Sonia’s story is the mundane righteous cruelty of her detractors, the fact that even on a topic as ordinary as family planning or a setting as minor as a Washington Post comment thread, religious belief has the power to trump humanity’s deepest shared ethic—the Golden Rule—and our most cherished moral emotion: compassion.

I have written in the past about “religion’s dirty dozen,” 12 really bad religious ideas that have made the world worse. The idea that religious beliefs themselves matter more than love and kindness, more than our shared humanity, should be at the top of the list.

Valerie Tarico is a psychologist and writer in Seattle, Washington. She is the author of Trusting Doubt: A Former Evangelical Looks at Old Beliefs in a New Light and Deas and Other Imaginings, and the founder of www.WisdomCommons.org.  Her articles about religion, reproductive health, and the role of women in society have been featured at sites including AlterNet, Salon, the Huffington Post, Grist, and Jezebel.  Subscribe at ValerieTarico.com.m.