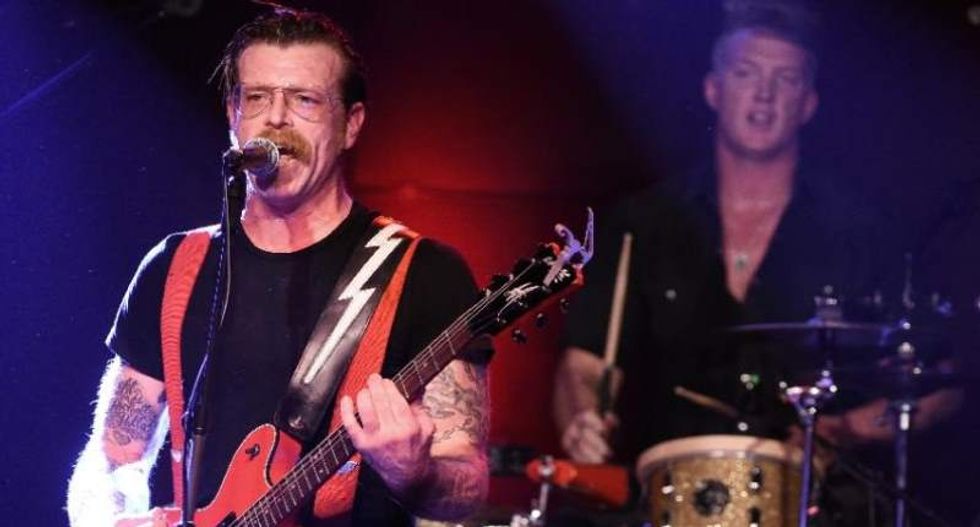 The frontman of the band whose concert turned into a terrorist bloodbath in Paris has suggested the attack was an inside job, saying he was suspicious of the club's security guards.

The historic Bataclan angrily rejected the "senseless" claim and said that Jesse Hughes' allegations were because he was traumatized.

Hughes, the singer and guitarist of Eagles of Death Metal, said he immediately felt uneasy when setting up for the November 13 show as a guard in charge of the backstage area at the Bataclan club did not make eye contact.

"I didn't like him at all. And so I immediately went to the promoter and said, 'Who's that guy? I want to put another dude on,'" Hughes said in an interview broadcast late Wednesday with Fox Business.

"He goes, 'Well, some of the other guards aren't here yet.' And eventually I found out that six or so wouldn't show up at all," Hughes said.

"Out of respect for the police still investigating, I won't make a definite statement, but I'll say it seems rather obvious that they had a reason not to show up."

As the California rockers were playing, assailants opened fire and threw grenades to kill 90 people, the deadliest in a series of coordinated attacks around Paris claimed by the Islamic State group that left a total of 130 dead and 350 injured, many seriously.

Hughes said that one of the assailants allowed three fans to leave the venue, in what he saw as further proof that the culprits had previous knowledge of the Bataclan, a famed Paris venue for mid-sized rock shows.

"The senseless statements of Mr. Jesse Hughes are the result of the enormous trauma," the Bataclan said in a statement.

"All witness accounts from the day show the professionalism and courage of the security personnel," it said, adding "their intervention likely saved hundreds of people."

"A judicial process is under way," it said. "We would like justice to complete its work calmly."

Hughes previously made similar allegations in an interview with Vanity Fair magazine, saying he wished he had "followed my instinct" as the soundman had spotted two people inside the club before the show whose attire and behavior were at striking odds with the typical rock audience.

Hughes, in contrast to many rockers, was known even before the attacks for his right-leaning views and support for the right to own guns in the United States.

In the interview with Fox Business, Hughes said he was not necessarily advocating gun ownership but wished that fans had ways to defend themselves.

"I don't want to shoot anybody -- I would hate to do that," he said, breaking down with emotion.

"But I, more than that, do not want to let the bad guys take any of my people, and I don't want to go out like a punk."