Facing losses and lost in a grain slump, US farmers have no choice but to plant more corn 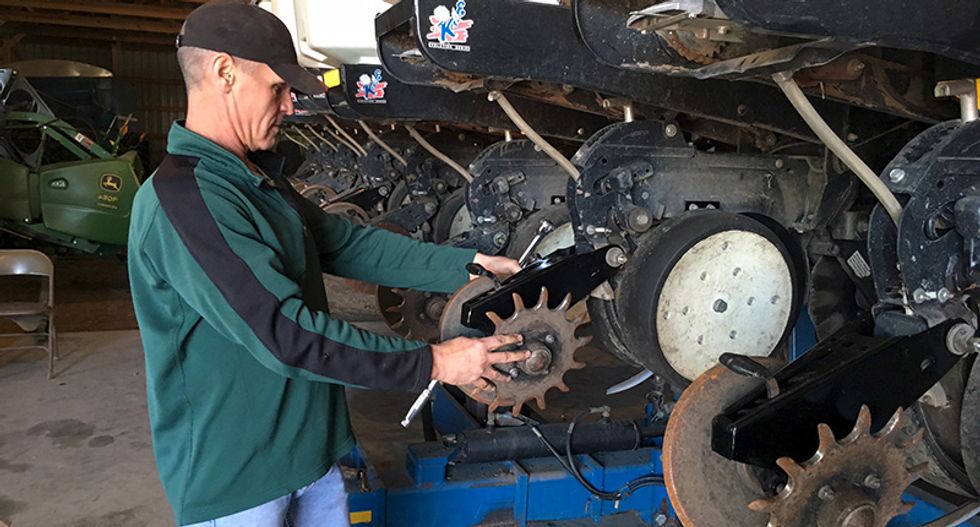 Three years into a grain market slump, U.S. farmers are set to plant more corn, taking a calculated gamble that higher sales will help them make up for falling prices without triggering even more declines.

Forecasts suggest that at current prices growers will be able to cover their variable expenses such as seed and fertilizer. By planting more and scrimping on everything from labor to crop chemicals, farmers hope to cover a portion of hefty fixed costs, including land rents.

Their strategy marks a reversal from the last time that prices for corn, soybeans and wheat fell for three years running in mid-1980s. At that time, farmers cut production and prices began rising.

Illinois farmer Dave Kestel said he would be lucky to break even on the corn he planned to start planting in April on his farm in Manhattan, an hour's drive southwest from Chicago. He aims to plant roughly the same area as last year, about 500 acres (202.34 hectares), despite lower prices.

"It's a vicious circle, but you still do it," Kestel said, about planting corn.

Barring a weather disaster, more corn planted means a bigger harvest that will add to massive global crop inventories that have kept prices below break-even levels. The swollen stockpiles also make any price recovery unlikely even if U.S. output were to decline.

With no rebound in sight, cranking up production might be the best shot U.S. farmers have at balancing their books in a falling market, economists say.

Still, many will fall short of covering the outlays they cannot change, and paying for land and the cost of depreciating machinery will drag operations into the red, they warn.

Variable expenses often make up roughly half of a corn farmer's costs, economists say, although those vary from farm to farm and state to state.

"There still is a fixed cost out there no matter what you do, so the incentive is to go out there and get the variable cost covered and eat into the fixed cost," said Gary Schnitkey, a University of Illinois economist.

In major grain-producing states of the Midwest, losses from growing corn this year could top $100 per acre, according to forecasts from economists and academics.

In central Illinois, for example, planting corn will bring in gross revenues of $777 per acre, according to University of Illinois estimates. After variable and fixed costs of $858 per acre, farmers are expected to lose $81 an acre.

This year is shaping up to be the first time since records began in 1973 when U.S. farmers have increased corn plantings in the face of a three-year slide in prices.

The U.S. Department of Agriculture (USDA) forecasts farm incomes will fall 3 percent this year after a 38 percent slump in 2015 and a 27 percent drop in 2014. Big harvests threaten to prolong the pain well into 2017.

For corn, cash receipts are expected to drop 1.7 percent from last year to $46.4 billion, according to the USDA.

The deadline for enrolling in the program for 2016 has long passed.

The USDA is expected to estimate corn plantings at 90 million acres (364,217 square kilometers), up 2.2 percent from 2015, and soybean plantings at 83.1 million, up 0.5 percent, in a report on Thursday, according to analysts polled by Reuters.

That would put corn plantings about the same as the latest projection from February, at an area roughly the size of Germany. The USDA in February estimated soybean plantings would be lower at 82.5 million acres.

Aakre said plantings should shrink to help prices eventually recover. However, farmers focus on keeping their operations afloat this year, instead of tightening global supplies.

"The industry needs to contract, but if the farmer contracts he makes (his) situation worse," he said.

To save money, Kestel, a mountain climber and former flight attendant, is repairing his planting machine himself, rather than paying a mechanic $80 an hour to do it. He may not pay for an airplane to spray his crops with fungicide as he did last year.

"I figure I'm out here cutting a fat hog," he said.

(Reporting by Tom Polansek in Manhattan, Ill., and Karl Plume in Chicago. Additional reporting by Mark Weinraub in Chicago.; Editing by Jo Winterbottom and Tomasz Janowski)