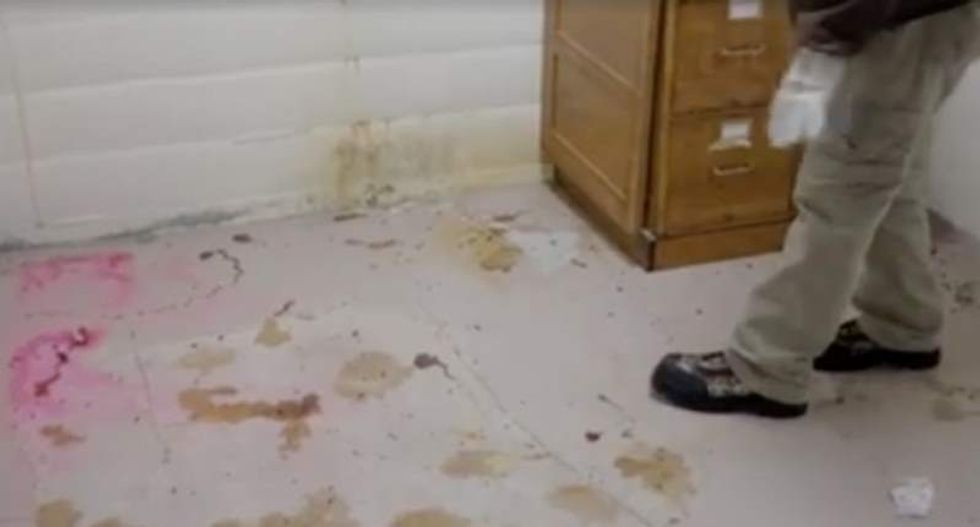 By Sam Levin, The Guardian

The US Fish and Wildlife Service released new photos from the scene of the 41-day standoff at a wildlife refuge in eastern Oregon, showing that protesters left behind trashed buildings, damaged facilities, a compromised septic system and government offices with missing possessions.

Government officials who run the bird sanctuary have also revealed that the cost of the occupation for the federal agency is at least $6 million – a number that could grow as workers continue to assess and repair damage.

Since the high-profile occupation, which drew armed militiamen from across the country, began 2 January at the headquarters of the refuge, protest leaders have insisted that they were not damaging any public property and were instead cleaning up facilities.

But after dozens of activists joined the occupation – some working on federal computers, rummaging through office records and artifacts, building roads and trenches and establishing group living quarters on site – officials say the damage was significant and costly.

“These pictures are a microcosm of how bad it really was,” said Jason Holm, assistant regional director for the fish and wildlife service. The agency took the photos after the Federal Bureau of Investigation (FBI) completed its extensive sweep of the site, removing evidence in the government’s criminal conspiracy case, which now includes 26 defendants facing serious charges for their roles in the standoff.

“It brings out some emotions and some anger,” Holm said, referring to the reactions from the federal employees who have returned to the refuge. “They are thrilled to be back. These are people who generally don’t become biologists to be in the public sphere. They love creatures and places and are passionate about doing their jobs.”

Attorneys representing the jailed activists and supporters of the occupation have argued that the public should not trust the official damage reports from the FBI and other federal agencies. Critics have recently pointed to formal allegations that FBI agents may have lied and removed evidence in the fatal shooting of protester LaVoy Finicum as a clear indication of the government’s dishonest tactics in its investigation and ongoing prosecution.

During the occupation, activists renamed the refuge the “Harney County Resource Center” and argued that the federal government has no authority on the state’s public lands and should instead allow local control.

After federal prosecutors this week revealed new charges against one standoff participant for allegedly damaging government property, occupier Shawna Cox –who is one of the defendants in the case on house arrest while awaiting trial – said the protesters were respectful of the site and caused no damage.

“Everyone was out there fixing and cleaning,” she said by phone. “I can’t imagine them [damaging property]. They’re not that type of people.”

The agency spent roughly $2 million relocating employees and their families throughout the region, according to Holm, who said many faced threats from activists online and in person in Harney County. Some anti-government protesters confronted workers in the local town of Burns and some refuge employees reported being followed and stalked at their homes, Holm said.

“Strange cars were parked in front of houses. There were encounters at grocery stores where people were confronted,” said Holm, adding that the government had intel suggesting one federal refuge employee was “targeted for kidnapping”.

This $6 million is in addition to the more than $3 million that Oregon government agencies reported spending on the occupation.

During the occupation, protesters, visitors, reporters and others were free to enter most buildings at the refuge, which were unlocked when the activists took over.

Some workers returned to their offices to find personal belongings and government equipment gone, including money and cameras, Holm said.

The refuge is now open to the public, except for the headquarters where the occupation occurred, which could remain closed until early summer. Employees are currently stationed in temporary trailers.

‘Most significant criminal exposure Trump has ever faced’: expert breaks down the legal liabilities

Donald Trump is likely to lose his secret court battle to prevent a federal grand jury in Washington, D.C. from obtaining evidence related to the unsuccessful effort to prevent the peaceful transfer of power after Joe Biden won the 2020 presidential election, according to an analysis that aired Friday on CNN.

CNN reported, "Former President Donald Trump’s attorneys are fighting a secret court battle to block a federal grand jury from gathering information from an expanding circle of close Trump aides about his efforts to overturn the 2020 election, people briefed on the matter told CNN. The high-stakes legal dispute – which included the appearance of three attorneys representing Trump at the Washington, DC, federal courthouse on Thursday afternoon – is the most aggressive step taken by the former President to assert executive and attorney-client privileges in order to prevent some witnesses from sharing information in the criminal investigation events surrounding January 6, 2021."

A former cop in rural Texas was acquitted after he allegedly shot and killed an unarmed Black man, and the lawyer for the victim's family made sure to note that the case was heard by an all-white jury.

Shaun Lucas, a former police officer in Hunt County, Texas, shot 31-year-old Jonathan Pryce outside of a convenience store in 2020, killing him. Texas authorities charged Lucas with murder after concluding that it was unnecessary for him to have fired his gun.

There is a piece of the civil lawsuit against the Trump Organization by New York Attorney General Letitia James that is falling by the wayside in the discussion about Donald Trump's legal problems.

Speaking to MSNBC's Nicolle Wallace on Friday, former Trump lawyer Michael Cohen noted that there were subpoenas sent to Trump about classified documents he said that he didn't have.