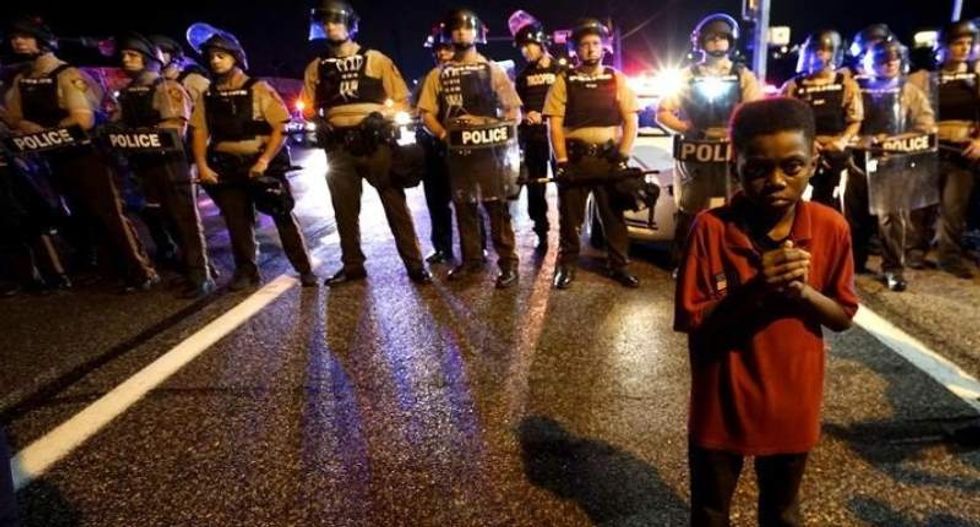 Amarion Allen, 11-years-old, stands in front of a police line shortly before shots were fired in a police-officer involved shooting in Ferguson, Missouri on Aug. 9, 2015. (Reuters/Rick Wilking)

The city council in Ferguson, Missouri said on Monday it may reconsider accepting an agreement with the Justice Department to overhaul its local justice system that it had previously sought to change, after the city faced legal action.

Citing cost concerns, the council voted on Feb. 10 to amend the agreement it had reached with the Justice Department to reform the city police department and municipal courts to address racial divisions.

The accord followed protests, sometimes violent, after the August 2014 killing of an unarmed black teen by a white police officer.

The Justice Department announced one day after the city council's vote that it would sue Ferguson to enforce the agreement without revisions.

Vanita Gupta, assistant attorney general in the Justice Department's Civil Rights Division, said in a letter to the city council on Friday that it is the department's policy to work with cities who find the cost of such agreements prohibitive.

"It is not uncommon for financial or staffing challenges to arise in the course of implementation of our consent decrees," Gupta said in the letter. "Provided those challenges are genuine, approached in good faith and not pretexts for non-compliance, we are committed to working with jurisdictions to overcome those challenges."

In a statement released Monday, the Ferguson city council said that with those assurances, it "may reconsider whether or not to authorize" the settlement at a meeting on Tuesday.

If the city council votes to reconsider the agreement and then votes to approve it, the Justice Department's lawsuit against the city would be resolved.