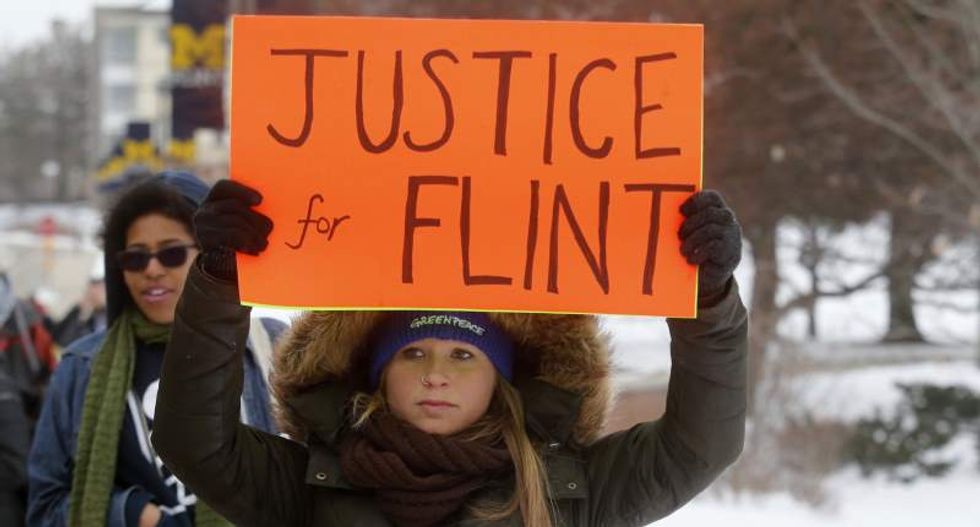 Demonstrators protest over Flint, Michigan contaminated water crisis outside of the venue where the Democratic U.S. presidential candidates' debate was being held in Flint, Michigan in this March 6, 2016 file photo. (Reuters/Rebecca Cook Files)

A group of Flint families with children has filed new lawsuits in the Michigan city's water crisis, accusing private companies of professional negligence and government employees of misconduct that led to the contamination of the water supply.

The lawsuits filed on Thursday in Genesee County court, along with nine filed earlier in March, cover 50 children allegedly suffering from lead poisoning from drinking Flint water. The cases were all brought by Corey Stern, a New York attorney who specializes in child lead poisoning cases.

The lawsuits seek monetary damages from engineering firms Lockwood, Andrews & Newnam and Rowe Professional Services Co, two companies involved in carrying out the switch, for cost reasons, of the city's water supply from Lake Huron to the Flint River in April 2014.

The more corrosive river water caused lead to leach into the water from the pipes.

Environmental consultants Veolia North America, which was hired in early 2015 to review Flint's water quality and found it complied with standards, is also a defendant.

The state's slow response to the crisis has been widely criticized, with some calls for Michigan Governor Rick Snyder's resignation.

Flint, a predominantly black city of 100,000, was under the control of a state-appointed emergency manager when it switched its water source. It was switched back last October after tests found high levels of lead in blood samples taken from children.

Children are especially vulnerable to lead exposure, as even small amounts can cause permanent damage.

A separate federal class action filed on Monday seeks damages on behalf of a proposed class of "tens of thousands" of Flint residents and property owners, claiming Snyder and other governmental officials failed to take measures required by federal law to eliminate the dangers and downplayed the severity of the contamination.

Other lawsuits that have been filed seek compensation for water bills, immediate replacement of lead pipes or injuries to residents.

(Reporting by David Bailey in Minneapolis; Editing by Anthony Lin and Sandra Maler)