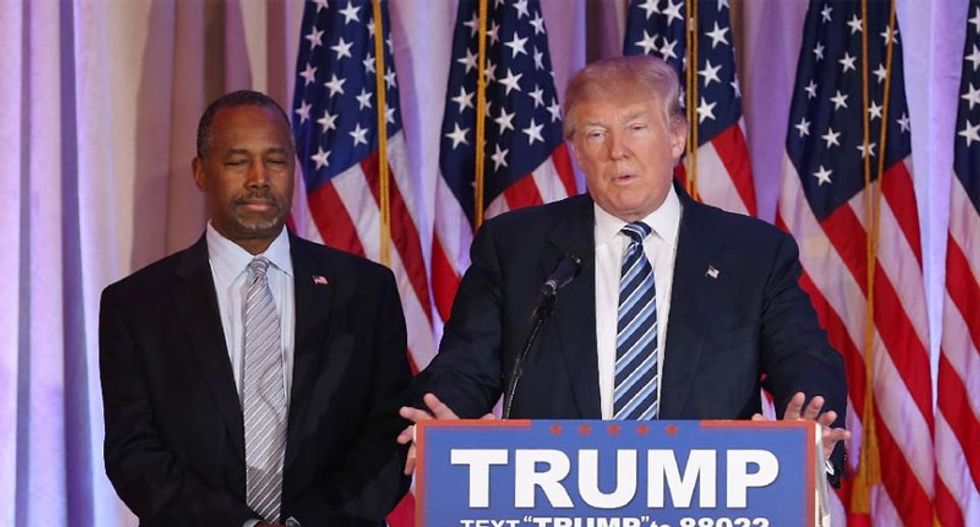 Carson made the endorsement at one of Trump's clubs in Palm Beach, Florida.

"There are two different Donald Trumps," Carson said in his endorsement.

"There's the one you see on the stage, and there's the one who's is very cerebral, sits there, you can have a very good conversation with him."

Carson praised Trump as "a very intelligent man who cares deeply about America."

Carson said that the election is "not about me. It's not about Donald Trump. It's about America."

The religiously conservative Carson said that in talking with Trump he discovered that "there's a lot more alignment, philosophically and spiritually, than I ever thought that there was."

Carson's outsider campaign soared last year but ultimately fizzled as he stumbled over questions about the veracity of aspects of his compelling life story.

Trump also mercilessly taunted and mocked him on the campaign trail, particularly over Carson's claim that he once tried to stab a fellow student but that the boy's belt buckle prevented the knife from breaking the skin.

On Friday however Carson made it clear that he and Trump "buried the hatchet. That was political stuff. That happens in American politics."

Trump praised Carson as someone "respected by everybody. Everybody wanted his endorsement, and everybody loves him, and truly, truly admires what he's done."

Florida, a main prize in the 2016 nominations race, votes Tuesday, and Trump is ahead there in polling on the Republican side. He is seeking to defeat Senator Marco Rubio, who sees his home state as a do-or-die contest.

Trump earlier sided with Carson over a dispute in Iowa, when Senator Ted Cruz's campaign wrongly told voters that Carson had dropped out of the race before the state's February 1 caucuses.