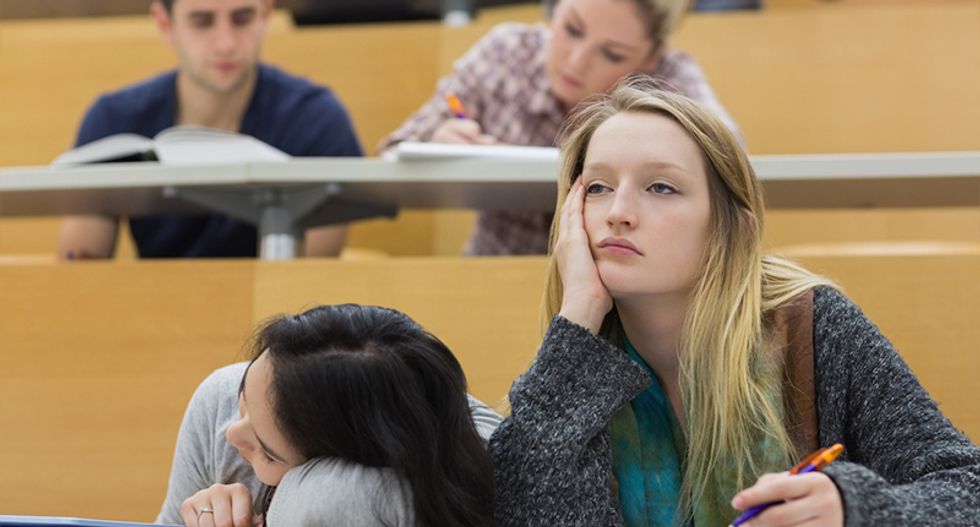 Tuesday afternoon the Oklahoma state House of Representatives passed the "Humanity of the Unborn Child Act" by a vote of 64-12. Anti-choice activists descended on the state capitol where they followed and harassed staffers while lobbying for the abolition of a woman's right to choose.

Grades 9 through 12 would be required to maintain a program that educates students on "the humanity of a child in utero," the bill states. It would "develop, identify, publicize the availability of and widely disseminate the most readily available, accurate and up-to-date secondary school unborn child humanity education and abortion prevention curricula and materials, including audiovisual materials which clearly and consistently teach that abortion is against public policy..." The new law would create a revolving fund in the State Treasury for the State Board of Education that would not be subject to fiscal year limitations like the $1.2 billion budget shortfall the state is currently suffering from.

It also prohibits any mention or discussion pertaining to "human sexuality," so the course would talk about pregnancy but not about what causes pregnancy.

The state is so broke, however, they can barely keep the lights on much less support programs that help children that have been born. The Department of Human Services received a $11.8 million cut in state appropriations this year and they are now in a $45.2 million shortfall. It isn't just the state's children's services either. One Oklahoma high school held their classes in a 100-year-old building that had to be condemned for safety concerns. Students now have school at a local grocery store. Earlier that year, students staged a walk-out to raise awareness around an upcoming vote on a bond issue that would create funding for another school building, but the bond issue failed, leaving students nowhere to go.

House Democratic Leader Scott Inman said that issues like "The Humanity of the Unborn Child Act" divert attention from lawmakers who should be focusing on more important things that Oklahoma children need. "Social issues are important because they are important to the taxpayers of Oklahoma," Inman said. "But what we want to do is stay focused on the big issue at hand. And that is balancing the budget."

The fund the bill would create and the money it would pull from other services aren't the only financial concerns, however. In the last several years, Oklahoma has passed anti-choice laws that have cost the state a large amount to defend in court. They've been struck down. According to an AP report, the state had to pay $97,000 to hire an abortion law expert to defend an abortion law in one of their cases. The staff time of one assistant attorney general in Oklahoma runs about $62,000 and the state wants to hire a dozen more. Those funds don't even begin to cover the work outsourced by the Attorney General's office to law firms. One firm couldn't immediately calculate the cost of their work on a case requiring lengthy reporting on women who received abortion procedures, but the spending cap they were given by the AG was $100,000. Last spring, the legislature gave the office of the Attorney General $5 million for private attorneys that were hired to work on just two cases.

State Rep. Cory Williams said that it isn't only the anti-abortion laws that are costing the state millions. In just 48 hours after Oklahoma banned Sharia Law the lawsuits began piling up. While there is no transparency on costs incurred by these laws, in the Sharia Law case, a federal judge ordered the state of Oklahoma to pay the attorney's fees for the people who sued, totaling over $300,000.