'He'll bring back the jobs': Trump finds support in the shadow of Ohio factories 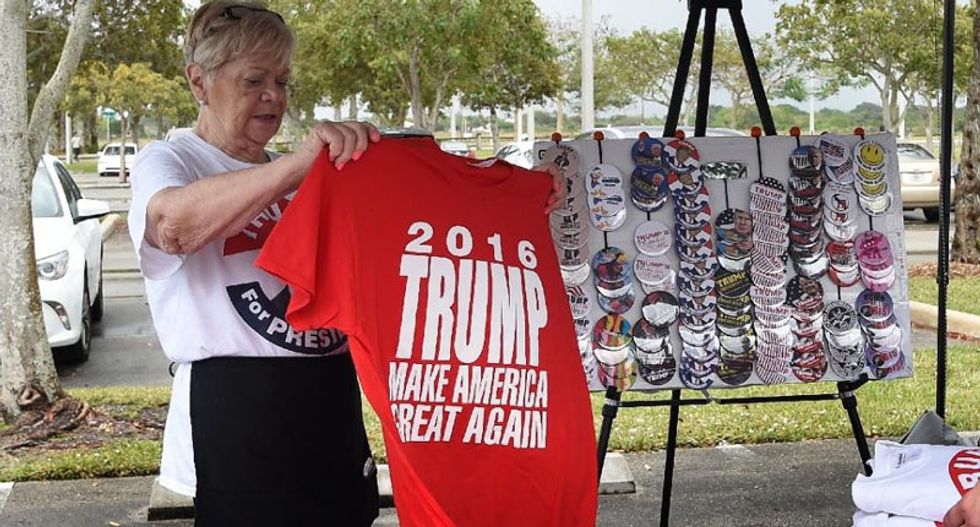 A vendor folds tee shirts prior to a rally for Republican presidential candidate Donald Trump on March 13, 2016 (AFP Photo/Rhona Wise)

Stephen Emmert lost his Ohio longshoreman job in the 1990s, the victim of industrial automation.

As the Rust Belt state struggles to recover from economic decline, the ex-Democrat said only one presidential candidate can set things right: billionaire Donald Trump.

Emmert knows that any path to victory for the Republican frontrunner will include votes from Ohio's gritty factory communities, from the shores of Lake Erie to hardscrabble Canton and beyond, where blue-collar union laborers often decide the outcome in one of America's most politically consequential states.

No Republican, after all, has won the White House without winning Ohio in the general election.

Already Trump has romped to primary election victory in nearby Michigan, another industrial state.

To pull off a similar feat in Ohio, which heads to its primary on Tuesday, Trump will need to cobble together Republicans in places like largely white Canton, as well as working-class Democrats.

His fiercest competition in the state race is Ohio Governor John Kasich, who holds a slim lead in polls.

In a series of interviews with AFP, several Ohio laborers expressed confidence that Trump will generate crossover appeal in Tuesday's big primary test.

Emmert used to be a dedicated union man, back when he worked on the Cuyahoga River docks offloading ore in the shadow of ArcelorMittal, whose hulking, century-old Cleveland steel mill remains in operation today.

But technology swallowed up his position.

"I was a dyed-in-the-wool Democrat back when. A union guy," said Emmert.

Now a Teamsters union member who has driven a rig more than one million miles over the past decade, he said he has had it with the political system, and winces when asked if he could support Democratic frontrunner Hillary Clinton.

He and several friends and neighbors are now turning to Trump, he said, much like "Reagan Democrats" who defected in the 1980s to support eventual president Ronald Reagan.

"Look at all the empty factories," Emmert said as he stood in line to attend Trump's rally Saturday in Cleveland.

"He'll bring back the jobs."

Outsourcing forced thousands of Ohio factories to shut their doors, as manufacturing shifted to China, Mexico and elsewhere.

Industries like steel have declined for decades. Ohio has lost about 200,000 manufacturing jobs since the 2000 election, as American companies incentivized by cheap labor, tax protections and lax regulations headed abroad.

In a series of Ohio appearances Trump has promised to ease regulations and impose tariffs on imports, a message that is music to Emmert's ears.

"Plenty of our workers and managers are intrigued by candidate Donald Trump," said an official at the Ohio Manufacturers' Association, who asked not to be named so that he could speak more openly about the Republican frontrunner.

A woman at a United Steelworkers local union office acknowledged on condition of anonymity that members were considering backing Trump.

In West Chester, a suburb of Cincinnati, a man at a Trump rally Sunday carried a hand-written "Teamsters for Trump" sign, although he declined to talk with reporters.

Ohio is one of about 10 states that are major battlegrounds in the presidential election. It is seen as a political and demographic microcosm of America, and includes core conservatives, independents, more progressive suburbanites and an increasing proportion of Hispanics.

"A lot of people, Republican or Democrat, do think (Trump) can be a savior who brings back jobs," explained Kevin Berger, who runs a comic book store in Cleveland.

The 31-year-old epitomizes the internal conflict that some Ohio workers seem to have in choosing between Trump and Senator Bernie Sanders, the self-described democratic socialist who is challenging Clinton for their party's nomination.

Sanders is committed to reining in economic inequalities, Berger said, "but I personally think Trump would be good for business and our economy."

"He targets people like us," Trumka said in a video to members in January. Trump, he added, "thinks wages are already too high."

Joe Immormino, who owns a scrap yard in suburban Cleveland and has watched his industry implode in recent years, said he is "120 percent" for Trump.

"I'd just like to see a businessman in office," he said.

The 57-year-old appreciates Trump's pledge to re-impose tougher tariffs on materials sourced from China, Russia and Turkey that are reducing his profit margins.

"I want to see somebody who's never been in politics," Immormino added.

"Let's go down this track and see what happens. How bad can it be?"