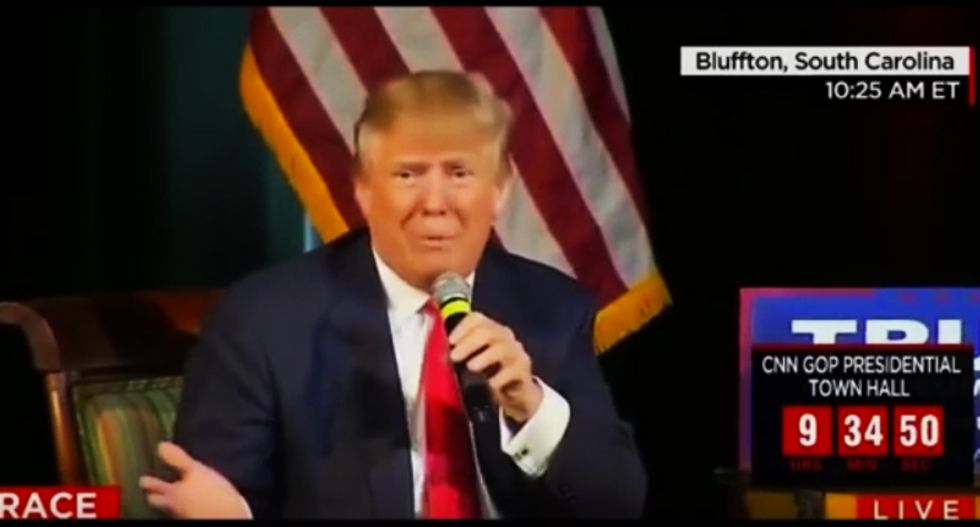 Republican presidential candidate Donald Trump, who scored a major victory in a series of Super Tuesday nominating contests, has been criticized by some in his party for being vague on policy specifics and heavy on rhetoric.

Here is a closer look at what Trump has said he would do on trade, taxes, the economy, immigration, healthcare and defense should he become the nominee and win the Nov. 8 election. The policies are drawn from a review of his website, stump speeches, debates and town halls, and televised interviews.

Trump has complained that China, Japan, Mexico, Vietnam and India are "ripping us off" by devaluing their currencies and keeping out some U.S. exports.

He would not sign the 12-nation Trans-Pacific Partnership (TPP) trade pact and would renegotiate the North American Free Trade Agreement (NAFTA) with Mexico and Canada.

He would designate China a currency manipulator and impose countervailing duties on its exports. He also wants to pursue a World Trade Organization case on Chinese government programs that subsidize exporters.

Trump has said he would put activist investor Carl Icahn in charge of negotiating a better trade relationship with China. Icahn has said he is happy to advise Trump, but would not seek a formal position if Trump were elected.

Trump has said he would slap 35 percent tariffs on air conditioners made by United Technologies Corp's Carrier in Mexico after the company decided to move production there from Indiana, and on Ford Motor Corp vehicles made in Mexico that are sold in the United States.

Trump has pledged to cut and simplify taxes. Individuals making less than $25,000 per year and married filers earning less than $50,000 would not pay income tax.

There would be three other brackets, down from seven currently, with a top marginal income tax rate of 25 percent, and a top rate for long-term capital gains and dividends of 20 percent.

He would eliminate the alternative minimum tax, the estate tax, and the carried interest tax break that allows investment fund managers to treat income as capital gains.

The corporate tax rate would be cut to 15 percent, down from the current level of 35 percent.

He would phase in a "reasonable cap" on deductions for business interest expenses and would cut other corporate loopholes.

Trump would impose a one-time 10 percent "deemed repatriation" tax on deferred corporate overseas profits and would end deferral of income from foreign subsidiaries.

The Tax Foundation, an independent policy research group, has said Trump's plan would cost more than $10 trillion over the next decade. His campaign has said the plan is fully paid for.

Trump has pledged to get rid of the $19 trillion deficit by boosting jobs, and cutting government waste, but he has not released a formal policy paper on how he would do this.

He has said he would not cut the Medicare and Medicaid health care programs for senior citizens and low income Americans, nor Social Security retirement benefits.

He would cut the Education Department and the Environmental Protection Agency.

Trump has promised to build a high wall at the southern border to keep out illegal immigrants that he has said would cost $10 billion to $12 billion.

Mexico would pay for the wall or face consequences, his campaign said. Trump would "impound" remittance payments to Mexico from undocumented workers, and increase visa and border crossing fees for Mexican workers. Applying tariffs on Mexican goods and cutting foreign aid are also "options," his campaign has said on his website.

He would deport the 11 million undocumented people living in America and end "birthright citizenship" for children born in the United States to illegal immigrants.

He has called for a temporary ban on Muslims entering the United States and would not allow refugees from Syria.

Trump would triple the number of border agents and require all businesses to use the E-Verify database to ensure employees are in the country legally.

He would withhold federal funding from "sanctuary cities" that decline to help the federal government deport illegal immigrants.

Trump has said he would repeal the Affordable Care Act, better known as Obamacare, and replace it with a system of health savings accounts.

He would still require insurers to provide coverage to people with preexisting medical conditions, a key feature of Obamacare.

He would move to allow insurance companies to sell plans across state lines to spur competition.

Trump has said he could save the government $300 billion by negotiating better prices with drug companies.

Trump has promised to "knock out" Islamic State quickly and said he is open to working with Russia to do so.

He has said he would "bomb the oil" that helps finance the insurgent group and stop the "back channels of banking" used by the group.

He has vowed to bring back the use of waterboarding, an interrogation technique that simulates drowning and has been banned as torture under U.S. law. He said he also supports other, unspecified techniques "a hell of a lot worse" than waterboarding.

He would "take out" the family members of Islamic State militants and would like to shut down "areas" of the Internet to try to stop the group from recruiting members.

He wants to build a "safe zone" for Syrian refugees in Syria. But Gulf states would have to pay for it.

He has said the United States should first deal with Islamic State before addressing President Bashar al-Assad's future, saying "We have to do one thing at a time."

He has questioned whether the United States should back opposition groups in Syria, saying "we have no idea who they are."

Trump has said he would increase the size and power of the U.S. military to make it "so strong, so powerful that nobody's going to mess with us."

He says too much money is wasted buying equipment the military does not want.

He wants Japan, Germany, South Korea and Saudi Arabia to bear more of the cost of military aid provided by the United States. "We can no longer defend all of these countries," he said, citing the deficit.

Trump would boost the U.S. military presence in the East and South China seas to "discourage Chinese adventurism," according to his website.