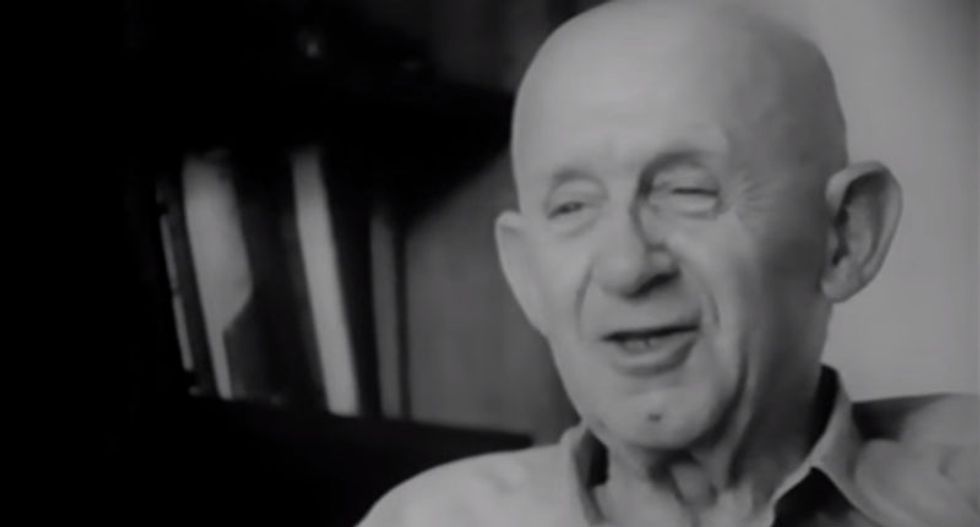 Does anyone remember James Kutcher, a victim of one of our Red Scares?

He was a badly disabled WWII veteran who belonged to the Socialist Workers Party, a miniscule and powerless Trotskyist group the  U.S. government claimed was trying to overthrow it violently. As a result, he was fired in 1948 from his job as a Veterans Administration filing clerk.

Robert Justin Goldstein's  convincing, disturbing, and impressive new book, Discrediting the Red Scare: The Cold War Trials of James Kutcher, The Legless Veteran (Kansas) reminds us that Kutcher fiercely resisted the government, and finally won his battle. But for Goldstein, professor emeritus at Oakland University, the persecution and ultimate redemption of James Kutcher would be forgotten.

But first, a few personal memories of that very dark era. My friend Lenny and I once watched two brave souls set up a stand on my neighborhood's major shopping avenue and asked passers-by to sign their petition  calling for support for the Bill of Rights. I have no idea whether they were serious or not, but very few, other than the two of us, signed, so pervasive was the fear. My sister's high school steno-typist teacher, whose Marine son was killed in the Pacific, was accused of communist leanings and lost his job,  a not unknown crime committed in our name in many of the nation's public schools and universities. Another of our teachers, the humorist Sam Levinson (he taught Spanish and named his son Conrad after my sister's fired teacher's late Marine son), was threatened by the McCarran Senate subcommittee on Internal Security because of alleged  Red connections and was rescued only after  Dr. Abraham Lefkowitz, our school principal and well-known anti -communist in the city's teacher wars, personally vouched for him. My gifted high school social studies teacher was fired by a frightened and spineless Board of Education. I was later told (though could never verify) that he went to work delivering milk.  While I was a grad student at Columbia's Russian Institute some of my classmates fantasized that FBI informers had been planted among us.

Nationally, it was a time of  unforgiving and paranoid Torquemadas, loyalty boards, the Attorney General's list of "subversive" organizations (the subject of Goldstein's earlier book American Blacklist), the A and H-Bombs, Hiss, the Hollywood Ten, Hoover, the Korean War, McCarthy, Red Channels, HUAC, the 1949 Peekskill riot, more blacklists and book banning, an ugly period when everyone affected was  seriously wounded. Years later, Michael Ybarra wisely pointed out in Washington Gone Mad that, while there were certainly communists in Washington, "it was the hunt for them that did the real damage."

James Kutcher was drafted in 1940 in our first peacetime draft at  age of 29. Assigned to the Infantry, he fought  in North Africa, Sicily, and  the Battle of San Pietro in Italy where a mortar shell cost him his legs. Hospitalized and then discharged after he was fitted for prosthetics, he was hired as a VA clerk but then dismissed because of his membership in the Trotskyist Socialist Workers Party, whose leaders had been found guilty in 1943 for plotting "to use force to overthrow the government" -- an absurd accusation.

(More about the tiny and toothless SWP may be found in my HNN reviews of  Donna T. Haverty- Stacke's Trotskyists on Trial: Free Speech and Political Persecution Since The Age of FDR and Said Sayrafiezadeh's When Skateboards Will Be Free: Memoirs of a Political Childhood.)

Relying in part on declassified FBI documents and the correspondence of contemporary lawyers, Goldstein reveals how the VA and Justice Department hounded and persecuted Kutcher and his parents who were also threatened with ejection from their Newark public housing apartment. The vindictiveness didn't stop there when the government tried to deny him his disability pension.  Even the "notoriously conservative American Legion" took exception to the firing, calling it an "almost perfect example of bureaucratic bungling," notes Goldstein. Kutcher, they charged, was fired from a "little $40.00 a week clerical job" solely for "cheerfully" admitting his ties with an "insignificant sect." Not everyone agreed with the American Legion, especially those on the Right.

The Communist Party also frowned on Kutcher's fight. A west coast party paper, the Daily People's World, rejected Kutcher's claim. "What is being touted as the 'case of the legless vet,' they argued, and a case for civil liberties, hasn't the remotest connection with the defense of civil rights." In their twisted logic, the Communists insisted that while the government's prosecution of their Stalinist party leaders violated their legal rights in no way did it do the same to Kutcher, a Trotskyist.

Even so, Kutcher had plenty of left and liberal supporters such as his invaluable pro bono lawyer, Joseph Rauh, writer Murray Kempton, civil rights leader A. Philip Randolph, philosopher  John Dewey, architectural and urban critic Lewis Mumford, Norman Mailer, the CIO, Washington Post and especially Harold Russell, who lost his arms in  the war and received an Academy Award for Best Supporting Actor for his role in the 1946 film "The Best Years of Our Lives." He and Kutcher had been roommates in Walter Reed Hospital, and  Kutcher later told Russell that without the government granting him a fair trial "things will get as bad here as in Russia."

Kutcher was relentless in his defense, traveling the country, one trip lasting nine months. He pleaded his case to Truman and Eisenhower, neither of whom answered.  In his own book, The Case of the Legless Veteran, -- which could not find an American book publisher other than SWP's Monad/Pathfinder Press  and later a documentary film -- Kutcher was elated, writing "that each administrative defeat, stripping away illusions about the intentions of the witch hunters, seemed to create new areas of interest and to open new avenues of support for us."

Finally, after eight long years, several court rulings saw to it that his job and pension were restored and he and his family could remain in their apartment. But irony of ironies, the SWP expelled Kutcher and several hundred other members which, Goldstein tells us, was  "following a change in leadership and policy in which Trotsky's theory of permanent revolution" was  discarded. The turn deeply upset Kutcher, who never abandoned his belief in socialism.

Still, the FBI would not let go. Goldstein discloses that after he was back at his VA job "the FBI continued to subject him to relentless surveillance." In September 1956, the FBI put him on its Security Index, which Goldstein explains was "a listing of individuals who would be rounded up and detained without trial in the case of a national security emergency." And in 1966, the FBI notified the Secret Service that Kutcher, still minus his legs,  was "potentially dangerous." Goldstein also discovered that as early as 1952 Kutcher had been included on the FBI's "detcom" or "detention of Communists" list.

In the ensuing years, the SWP sued the FBI and won its fourteen-year case against the FBI and some intelligence agencies and were awarded $246,000. Federal Judge Thomas Griesa  ruled that Hoover's FBI -- surprise! -- had carried out investigations against "entirely lawful and peaceful political activities,” much as they had done in their Cointelpro program.

James Kutcher died in a VA hospital in Brooklyn in 1989 barely noticed in a country whose fundamental rights he had fought to preserve on the battlefield and then against his own countrymen and government.  Goldstein laments: "In a final irony, Kutcher, who in life furnished the country with so many (often front-page) stories, was ignored in death. Not a single major paper mentioned his death or provided an obituary, with the exception of a tiny paid listing in the New York Times and a small obituary in New York's Newsday." Even so, I think Goldstein would surely agree, as I do, that the country owes much to James Kutcher for his courage in battling for freedom abroad and at home as well. I also wonder if Kutcher's experience is also a cautionary tale of what could lie ahead in our never-ending War on Terror.