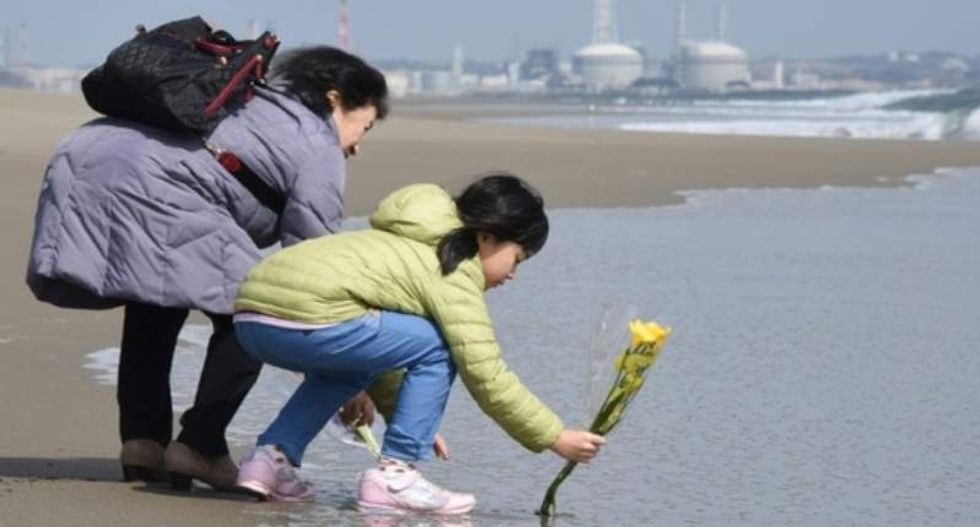 A girl and her grandmother put flowers on the beach in Sendai on March 11, 2016 (AFP/Toru Yamanaka)

Japan pauses on Friday to mark five years since an offshore earthquake spawned a monster tsunami that left about 18,500 people dead or missing along its northeastern coast and sparked the worst nuclear disaster in a quarter century.

The massive 9.0 magnitude quake unleashed a giant wall of water that swallowed schools and entire neighbourhoods, with unforgettable images spreading around the world of panicked residents fleeing to higher ground and vehicles and ships bobbing in the swirling waters of flooded towns.

The waves also swamped power supplies at the Fukushima Daiichi power plant, causing reactor meltdowns that released radiation in the most dangerous nuclear disaster since Chernobyl in 1986 and which continues to leave some areas uninhabitable.

Memorial events are expected across the northern coastal region directly hit by the catastrophe -- one of Japan's worst peacetime disasters.

In the capital Tokyo, which also shook violently when the quake struck, Emperor Akihito and Empress Michiko as well as Prime Minister Shinzo Abe will pay respects at a national ceremony.

The situation remain volatile in Fukushima prefecture, where the nuclear plant suffered explosions that spread radioactive material into the surrounding countryside and ocean.

The nuclear crisis forced tens of thousands of area residents to flee their homes, farms and fishing boats and at one point even led to discussions about possibly evacuation the capital area and its 30 million people.

Since then, authorities have brought the reactors to a state of "cold shutdown" and dispatched work crews to cleanse affected houses, sweep streets and shave topsoil in "decontamination" efforts.

Tokyo Electric Power, the operator of the shuttered plant, admits it has only made small steps in what is likely to be a four-decade battle to decommission the crippled reactors.

Despite growing public opposition to nuclear power as a result of the disaster, the government has pushed to restart idled reactors, saying they are essential to power the world's third largest economy.

Japan's entire stable of reactors was shuttered in the aftermath of the disaster but Abe and utility companies have been pushing to get reactors back in operation despite opposition and legal hurdles.

Only this week, a court ordered the shutdown of two nuclear reactors previously declared safe, demonstrating the ongoing battles over Japan's energy policy.

The disaster had forced resource-poor Japan to turn to expensive fossil fuels to plug the energy gap left by the shutdowns.

Speaking on the eve of the anniversary, Abe told the nation that it "cannot do without" nuclear power, though vowed to reduce dependence on it.

Abe, along with other political and business leaders, has frequently visited the disaster-struck region and pledged to help rebuild the area and lives of local people.

Expensive infrastructure including giant seawalls are being constructed and many local businesses have managed to rebuild -- including factories in the region crucial to auto industry supply chains that suffered major disruptions.

But many young families have moved away, accelerating its depopulation amid the broader greying of society, while those who have evacuated but want to return wonder if they ever can.

"For each and every one of the people whose lives were affected by the disaster, these five years must have been days of hardship and pain," Abe said Thursday.