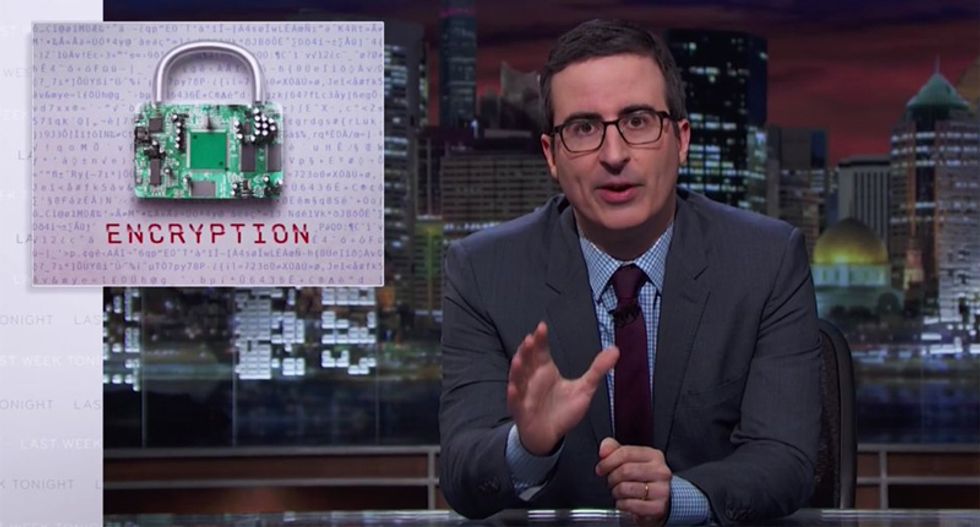 On HBO's Last Week Tonight, host John Oliver delved into the tricky subject of data encryption that has the FBI butting heads with Apple.

The host touched on the slippery slope of the Justice Department’s efforts to have Apple create a program that would allow them to break into San Bernardino shooter Syed Farook's iPhone to see what information it might contain.

Oliver admitted that there are privacy concerns, using the example of South Carolina Sen. Lindsay Graham's attack on the tech giant where he called them "stupid." Graham later backtracked and admitted that he developed an understanding of the can of worms it would open should hackers get their hands on whatever programing solution Apple provides law enforcement.

But, as Oliver pointed out, Apple products aren't are as secure as the company would have consumers believe, leaving your credit card information, passwords and private communications -- to say nothing of your collection of "dick pics" -- available to hackers who force Apple engineers to constantly have to stay ahead of the game.

Oliver noted that there are already devices easily found on the Internet that allows anyone to hack into iPhones using older operating systems.

With that in mind, the HBO host introduced a much more truthful Apple ad with a voice-over explaining, “Here’s something you should know. We’re barely one step ahead of hackers at all times so that when you idiots lose your phone, your information doesn’t wind up in the hands of guys like Gary.”

Pressed to come up with better encryption built into the operating system, one frenzied Apple engineer exclaims, “Are you f*cking kidding me? We’re engineers, not wizards!”