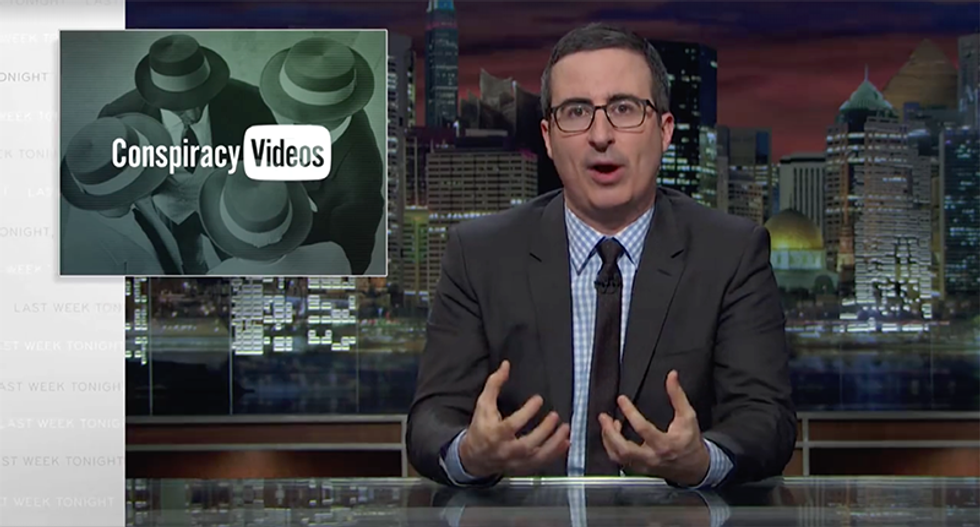 The fact that John Oliver was off this week for the Easter holiday might not be a conspiracy, but there are plenty of other conspiracy videos that are making the rounds on YouTube each and every day. Oliver is bloody well sick of it. These things are basically "science fiction for people who don't know they're watching science fiction," Oliver explained in a pre-recorded online video.

The truth is, when Oliver sees a video like this he's overcome with jealousy because "this guy has to be f*cking kidding, right? But then it's jealousy at the sheer scale and imagination required to believe that the Denver airport was designed by the Illuminati. Or that Katy Perry is actually JonBenet Ramsey all grown up." Oliver admits these are both better than any joke he could come up with in a million years.

On the off chance you're in the market to make your own conspiracy video like Ted Cruz is the Zodiac Killer or Marco Rubio and the Bilderberg conspiracy you should know there are two major criteria. "One," Oliver begins. "A wild claim that something we take for granted is actually the responsibility of robots, aliens or U.S. presidents who are also robots or aliens. Two, you need an eye for incredibly specific detail and an ability to make wild accusations with complete confidence."

That's why John Oliver is making his very own YouTube video to take on an issue that he says "no one has had the guts to explain." Until now that is. The issue is Cadbury Cream Eggs. These eggs show up early, we're talking January and to find out why all you must do is follow the money. A single cream egg weighs 34 grams which is the same number of streets on "Miricle on 34th Street." That film takes place on Christmas and "what's the most memorable gift on Christmas?" Oliver asks. "Five golden rings." The world's largest supply of gold comes from Germany and Germany is one of the places where Freemasonry took hold. While Cadbury is located in UK it is a short flight from Germany.

Apparently Cadbury's original name was Fry's cream eggs. "F-R-Y," Oliver spelled out. "Three letters, like a triangle. Now, take a cream egg, cut it in half, put it in that triangle. What does that look like? The Illuminati eye of Providence pyramid.