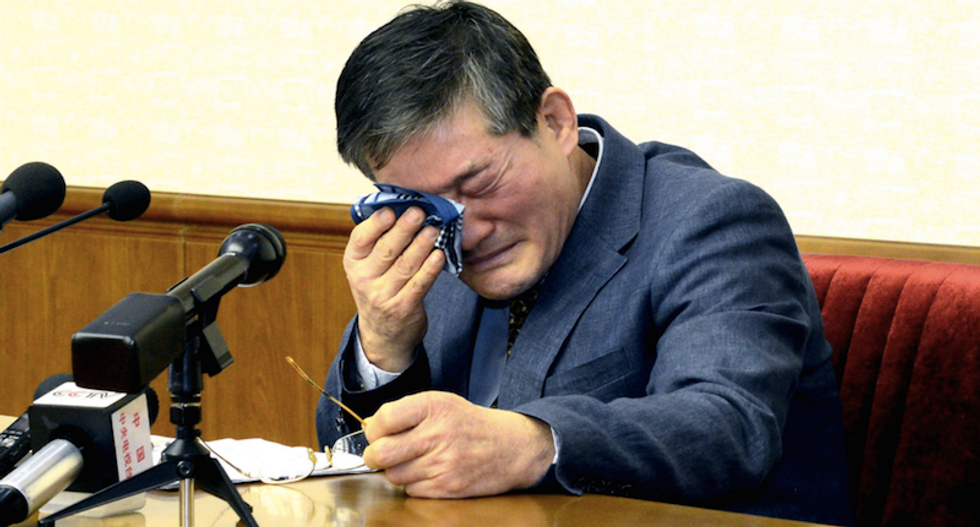 A man, who identified himself as Kim Dong Chul, previously said he was a naturalised American citizen and was arrested in North Korea in October, attends a news conference in Pyongyang, North Korea, in this undated photo released by North Korea's Korean Central News Agency (KCNA) in Pyongyang March 25, 2016. (REUTERS/KCNA)

A Korean-American man detained in North Korea has confessed to stealing military secrets and plotting subversion with South Koreans, the North's official news agency and foreign media reported on Friday.

North Korea, which has been criticized for its human rights record, has in the past used detained Americans to extract high-profile visits from the United States, with which it has no formal diplomatic relations.

Kim Dong Chul, who has previously said he was a naturalised American citizen and was arrested in North Korea in October, admitted to committing "unpardonable espionage" under the direction of the U.S. and South Korean governments and deeply apologised for his crimes, the North's KCNA news agency said.

"The extraordinary crime I committed was defaming and insulting the republic's highest dignity and its system and spreading false propaganda aimed at breaking down its solidarity," KCNA quoted Kim as saying.

A source in the North Korean capital of Pyongyang told Reuters that diplomats were notified in the morning of the confession and Kim's comments were similar to the recent confession of another American being held there, Otto Warmbier.

Warmbier was sentenced to 15 years of hard labour this month for trying to steal a propaganda banner. The North is also holding a Korean-Canadian Christian pastor, who is serving a life sentence for subversion.

Kim apologised for trying to steal military and state secrets in collusion with South Koreans, and said he was paid for doing it. He described the acts as aimed at overthrowing the North Korean regime, KCNA said.

Outside information is strictly controlled in North Korea and ordinary people there often use USB sticks or other portable memory drives to share foreign media.

An official introducing Kim to the media began the meeting by praising North Korea's nuclear achievements and its leader, Kim Jong Un, said the source in Pyongyang, who had direct knowledge of the meeting.

A defector from the North previously told Reuters that Kim was a Christian pastor who had worked in China and the United States and sent medical aid into the North.

CNN reported in January that Kim was 60 and from Fairfax, Virginia, and that he said he had spied on behalf of South Korea.

Kim told media he was born in Seoul in 1953 and moved to the United States when he was 19. He said he set up a business in the North Korean special economic zone of Rason in 2008, KCNA said.

He said his two daughters lived in New York and he had siblings in South Korea, it said.

North Korea faces the prospect of further international isolation after the U.N. Security Council imposed new sanctions after its fourth nuclear test in January, and a long-range rocket launch in February.