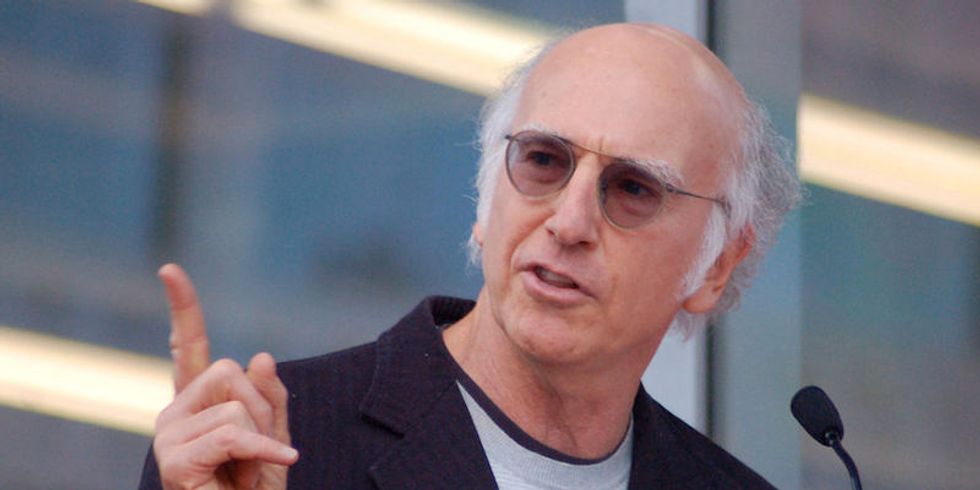 Countless people, newspapers, pundits, self-appointed definers of all things Jewish have challenged, questioned or even denied Bernie Sanders' Jewish identity... because it's a Friday. Speaking of which, good shabbos!

It's hard to keep up with all the self-righteous attacks and denouncements lobbed at Sanders but one of my favorites from this week alone was the nuanced and understated headline which graced the schlock-filled right wing rag that is Front Page:

HOW BERNIE SANDERS SOLD HIS SOUL TO BE AN AUTHENTIC LEFTIST

This soul selling was, of course, a reference to Sanders' decision not to the annual AIPAC conference.

But I don't want to leave out Jeffrey Goldberg, whose condescending and catty tweets about how Jewish identity is appropriately defined, was stunningly unaware. Goldberg tweeted truth to power during the Sanders-Clinton debate in Flint Michigan from earlier this month when host Anderson Cooper said the following:

Just this weekend there was an article I read in the Detroit News saying that you keep your Judaism in the background, and that’s disappointing some Jewish leaders. Is that intentional?

(Because if there is one publication that represents THE JEWS it's definitely the Detroit News or DN, as we Jews like to call it. And if there is one group of people who speaks for the Jews, it's definitely "some Jewish leaders." But that's neither here nor though, so moving on.) Bernie made the mistake of saying that part of his Jewish identity was shaped by the Holocaust, during which his father's side of the family was "wiped out." Well, that didn't sit too well with Jeffrey Goldberg, who sanctimoniously tweeted:

small programming note. The Holocaust should not define Jewishness. That is all.

Yes, that Jeffrey Goldberg. The Jeffrey Goldberg who implicitly or explicitly grounds everything Israel ever says or does in the Holocaust. It's not that he's hypocritical in Holocaust-shaming Sanders and telling him how he "should" and "should not" define his Jewishness. It's just that Goldberg wants Sanders to back off. Because that whole thing is kind of his beat.

Anyway, it turns out Bernie Sanders isn't the only Jew who gets accused of being self-loathing. I present you with the Bernie Sanders during Democratic Debate vs Larry Davis during episode of Curb Your Enthusiasm mashup!

Where's your Judaism?Some folks just won't take "I am proud to be Jewish" for an answer. Thanks to The Katie Halper Show: a WBAI radio show and podcast, Daniel Sieradski, and Abe Heisler for their work on this hilarious retort to those who say Bernie's just not Jewish enough.