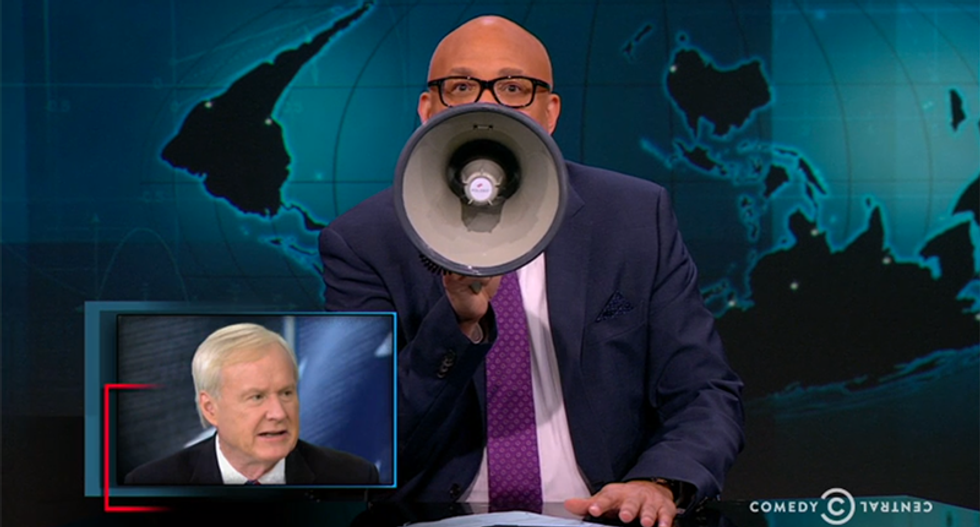 If there's one thing Chris Matthews never gets to do it's criticize anyone, anywhere for yelling into a microphone. On the International Women's Day "Nightly Show" episode, host Larry Wilmore called out the notorious shouter along with other male MSNBC panelist, including Lawrence O'Donnell, who said about Clinton's public speaking, "The microphone works. You don't have to yell."

"Yell?" Wilmore said. "They're talking to Hillary like she's an idiot. 'Me no understand magic talking stick,'" Wilmore said next to a photo of Clinton in a cavewoman costume. "Not to mention, it's just three men talking about this. Aren't you guys being a wee bit patronizing?" He then rolled a clip of Matthews saying that the shouting problem has nothing to do with gender but rather technique emphasizing it was not Clinton's personality or character. "No, no, no, no, no, Chris Matthews. No, no, no, no, no. You of all people do not get to be part of a conversation criticizing someone yelling into a microphone." Wilmore then ran just a few of the many many clips that exist of Matthews yelling into the MSNBC cameras. "Hey, Chris Matthews! Your microphone works!" Wilmore shouted into a bullhorn.

Wilmore then played videos of all of the other male candidates shouting into microphones in their speeches. Literally every candidate has done it and Larry David has even mocked Sanders for doing it. "Mmmmm, man voices sound goooood," Wilmore mocked. "There's just something presidential when a man yells into a microphone."

The notorious Sanders fan showed a clip from the CNN Democratic Debate this week where The Bern shushed Clinton when she interrupted him. "Ooooo, apparently Bernie's socialism doesn't include sharing the conversation. Alright, ok, sorry for the burn Bernie, but in all fairness they're at least having a heated debate. I'll tell you what, Chris Matthews, show Bernie Sanders how a real interrupter works." Wilmore played a clip of a Matthews interview with Clinton where he would pause, Clinton would begin to talk and Matthews would talk over her again. "My god, you are such an a*shole!"

Introducing his female comedian panel, Wilmore gave them an opportunity to explain how annoying it is to have male colleagues constantly interrupt and talk over them. "Sometimes we're only pretending to be good listeners because we're pissed about being interrupted," comedian Franchesca Ramsey said.

"Ever have a great idea you couldn't say because male colleagues wouldn't let you get a word in edgewise?" Robin Thede asked before the whole panel replied "We have!"

It isn't as if the ideas are better or worse but "everybody deserves to say their sh*tty ideas out loud without getting shushed," Ramsey explained.

"True equality is when every man and woman, indeed everyone on the gender spectrum, can get their thought out, and then be judged as an idiot," the panel of women said.