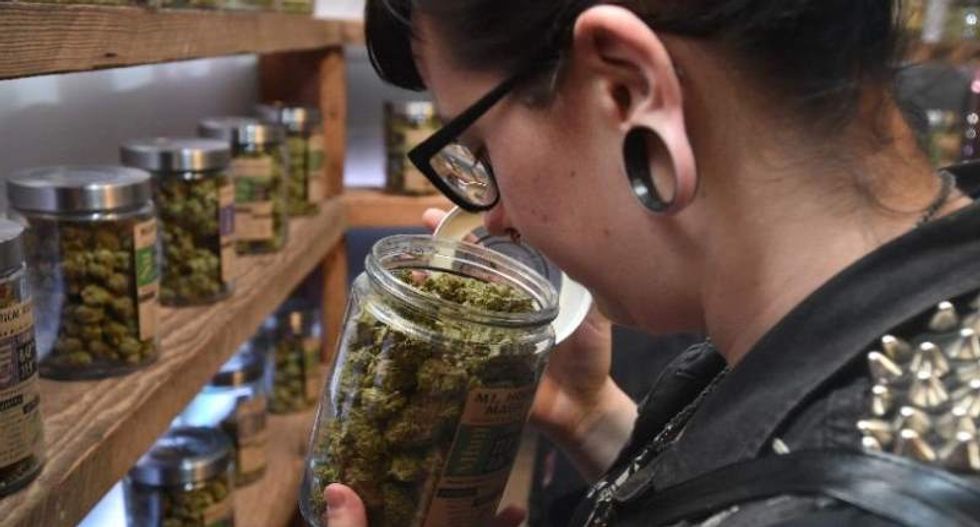 Legal marijuana is becoming more and more entrenched in the United States each year, and 2016 looks to be no exception.

In fact, some observers say it could be a "tipping point" for an ever-growing industry already worth billions of dollars.

By the end of the year, nearly a dozen states will decide whether to legalize pot -- with seven to determine whether they will allow recreational use.

Already 23 out of 50 states, plus the nation's capital, allow pot in some form, whether for medical or recreational purposes.

At the beginning of 2016, 86 percent of Americans lived in a state permitting cannabis use in some form.

As acceptance of the drug grows across the United States, so too do sales, which are expected to hit nearly $22 billion by 2020.

"It is going to be a very, very competitive market in the next five years," said John Kagia, director of industry analytics at New Frontier, a firm specializing in the cannabis business.

While possession, sale and consumption of marijuana remains illegal at the federal level, it is permitted for recreational use in four US states: Alaska, Colorado, Oregon and Washington, plus the US capital Washington.

According to Kagia, "2016 will be the tipping point" for pot, with 11 states slated to decide whether to allow it in one form or another.

The western states of Colorado and Washington pioneered recreational marijuana legalization in 2012, and sales have increased 30 percent per year on average since then in the United States, according to New Frontier and the ArcView Group, another firm focused on analyzing the cannabis industry.

The explosion in sales is due mainly to the legalization of recreational pot in some states. Although medical marijuana represented 92 percent of all pot sales in 2014, its share of the total is expected to fall to 47 percent in just four years.

The market for pot is in full bloom thanks to burgeoning industrial growing operations, marijuana edibles and a higher demand for equipment from those who want to grow -- or consume -- cannabis at home.

And while entrepreneurs see dollar signs behind every joint rolled, so too do state governments that stand to reap massive gains in the form of taxes.

Last year, Colorado earned some $135 million in taxes and licensing fees on nearly $1 billion in pot sales, according to The Denver Post.

The state of Washington, meanwhile, took in $70 million on statewide pot revenue totaling $257 million, a number that came in lower than expected after a pot shortage.

As America falls for pot, competition has become increasingly fierce, and the variation in regulations and taxes from state to state has given rise to some tension.

The amount of pot a person can grow varies as well, with up to four plants allowed in Oregon and six plants in Colorado, but none in the state of Washington.

Six plants are allowed in the US capital Washington, where marijuana advocates celebrated the city's one-year anniversary on Friday for legalizing pot.

But the US Congress, which has some authority in the capital's local governance, has prevented the city from regulating its pot market, which means buying and selling marijuana is still illegal.

The next president, who will be elected in November, could tip the balance in either direction at the federal level, experts told AFP at a marijuana tradeshow called CannaShow, held just over a week ago in Washington.

For those entering the marijuana industry, the market has sparked particular worries and uncertainties such as the fact that all payments must be made in cash since banking services are not extended to the pot industry, the risk of Congressional intervention or even a price war.

Moreover growing cannabis, or "cannaculture" as it is called, is a costly endeavor, with plants needing gallons of water and a constantly warm environment, and thus electricity.

According to New Frontier, cannabis is the greediest of crops in terms of electricity, accounting for one percent of all electricity used in the US (the same amount as 1.7 million homes) at an annual cost of $6 billion.

Electricity accounts for up to 50 percent of the wholesale price of cannabis.

Despite these pitfalls, pot proponents are quick to point out that legalization of the substance has its societal virtues, such as putting an end to some discriminatory arrests.

In the US capital, for example, 91 percent of those arrested for marijuana-related offenses before legalization were black.

Legalizing marijuana also keeps down overcrowding of courts and prisons.

Retired Baltimore police commander Neill Franklin, who is part of the advocacy group Law Enforcement Against Prohibition, an organization of officers who speak out against current drug policy, said that 500,000 to 600,000 people are arrested each year for cannabis in the United States.

U.S. Senator Marco Rubio (R-FL) lashed out with a Bible verse Wednesday morning, after the Senate passed legislation protecting same-sex and interracial marriage, while rejecting his attempt to infuse special religious rights through an amendment that even some Republicans refused to support.

The Respect for Marriage Act, which passed in a 61-36 vote Tuesday evening, will return to the House for a final vote before heading to President Joe Biden, who promised to sign it into law. Not included in the bill the Senate passed is Senator Rubio's amendment, which he claimed was necessary despite the clear religious protections included in the legislation.

The meeting, said Netanyahu, “was just wrong and misplaced. I think it's a mistake. He shouldn't do that ... I hope it's not repeated.”