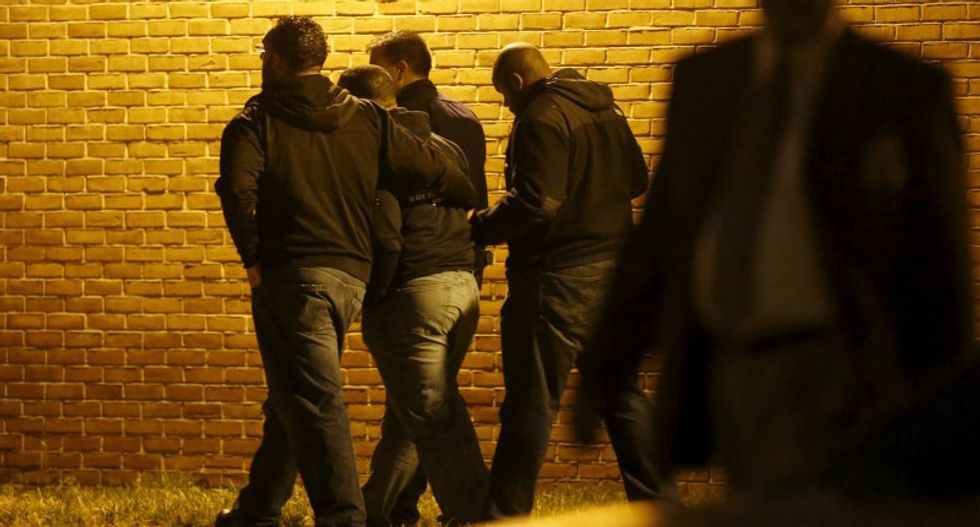 Police officers lead a fellow officer away as he sobbed outside the Prince George's Hospital Center where another officer, shot in the line of duty nearby, is being treated in Cheverly, Maryland, March 13, 2016. REUTERS/Jonathan Ernst

A gunman opened fire on Sunday on a Prince George's County police station in the Maryland suburbs of Washington, killing one officer in what authorities called an unprovoked attack, before the assailant and a second suspect were arrested.

The accused gunman, who was not identified, suffered non-life-threatening injuries in an ensuing gunfight with officers, and was being treated at a nearby hospital, county police said. The second suspect was taken into custody a short time later following a search of the area.

County Police Chief Henry Stawinski said he could offer no explanation for what might have precipitated the attack on the District 3 police station, which lies adjacent to police headquarters in Landover, Maryland, about 8 miles (13 km) east of Washington.

"It wasn't about anything," Stawinski told reporters at a news conference outside the hospital where the slain officer, Jacai Colson, 28, a four-year veteran of the force, was declared dead. "This man launched an attack on a police station and engaged several Prince George's County police officers in a gunfight, to which they responded heroically."

The chief called the attack unprovoked.

Police said the second suspect was under questioning and no other individuals were believed to have been involved in the incident.

Neither suspect was immediately identified.