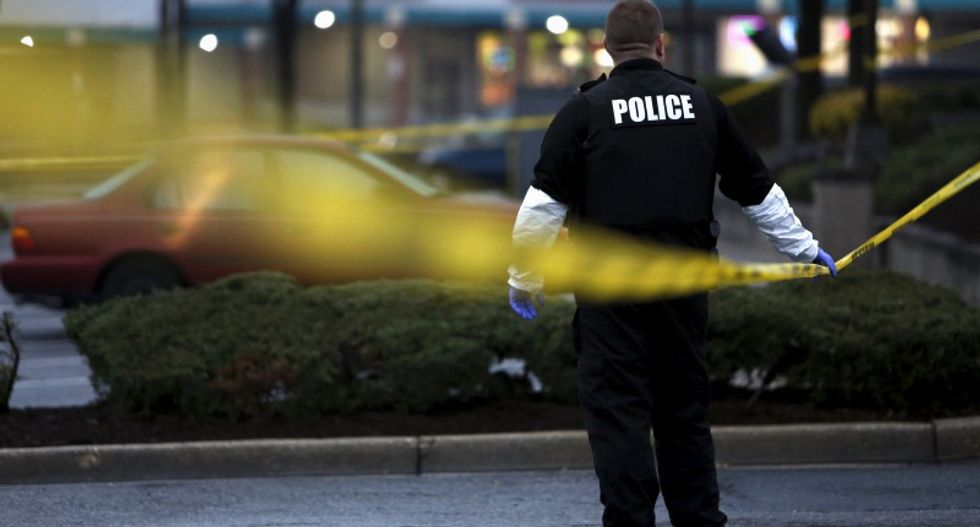 A police officer takes part in a search for evidence in the shooting of a Prince George's County Police officer in Landover, Maryland March 13, 2016. REUTERS/Jonathan Ernst

A police officer was shot and critically wounded on Sunday outside a Prince George's County police station in the Maryland suburbs of Washington, and two suspects were arrested a short time later, authorities said on Twitter.

There were no immediate official details provided on the circumstances of the shooting as police urged residents in a tweet to stay indoors and away from the police station in the vicinity of Palmer Park and Landover, Maryland, about 8 miles (13 km) east of the U.S. capital.

Police initially reported a "possible active shooter" situation had unfolded outside the Prince George's County Police Department's District 3 station, next to police headquarters, and authorities shut down a stretch of state Route 202 near the Washington Beltway as a search for suspects ensued.

Within an hour, police reported that one suspect had been taken into custody in connection with the shooting. A second suspect was reported apprehended a short time after that.

"We do not believe there are outstanding suspects but investigation is in early stages," police said on their Twitter feed announcing the second arrest.

Television news images showed about a dozen people detained by police sitting on the ground near an entrance to the Beltway, but it was not clear whether the individuals were suspects or potential witnesses to the shooting.

Local station WTTG-TV also broadcast footage showing dozens of officers - some joining hands with heads bowed - gathered outside Prince George's Hospital Center, where the wounded officer was reported to have been taken.

Reached by telephone, county police spokesman Corporal Harry Bond declined to give any further information, saying the police chief was expected to address the media at a news conference soon. In the meantime, he referred media to updates being posted on the department's Twitter account.

Local media reported that police were preparing to reopen Route 202 to traffic a little more than an hour after the shooting.

Police dispatch clerks answering the phone at the station declined to provide any information.