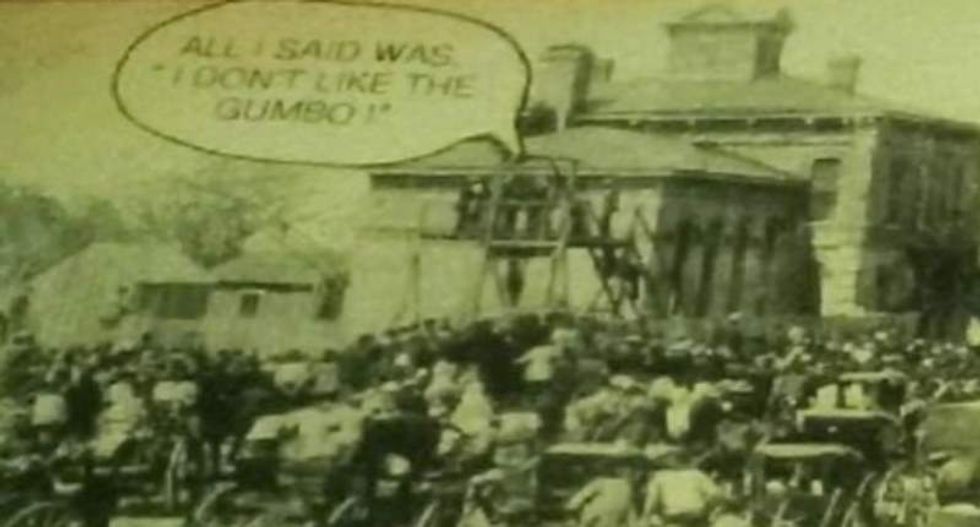 Photo of a lynching discovered at a Joe's Crab Shack location in Roseville, Minnesota. (WCCO-TV)

A Minnesota city condemned a local Joe's Crab Shack restaurant on Friday for displaying a "racist" photo at a table that showed a black man being hanged.

Two African-American diners this week saw the image from a hanging in Texas dating from around 1895. It was embedded in a table with a bubble placed near the person about to be hanged that read: "All I said was 'I don't like gumbo!'," TwinCities.com said.

One of the diners complained to local media about the photo.

"The City of Roseville was shocked and saddened to learn of the racist imagery being openly displayed at the Roseville location of national restaurant chain Joe’s Crab Shack," the city said in a statement on its website.

"This type of display is wholly unacceptable and unwelcome in the City of Roseville," it said.

The Minnesota restaurant deferred all questions to its corporate headquarters, Houston-based Ignite Restaurant Group Inc, which did not immediately respond to requests for comment.

Watch a report on the photo, as aired by WCCO-TV, below.