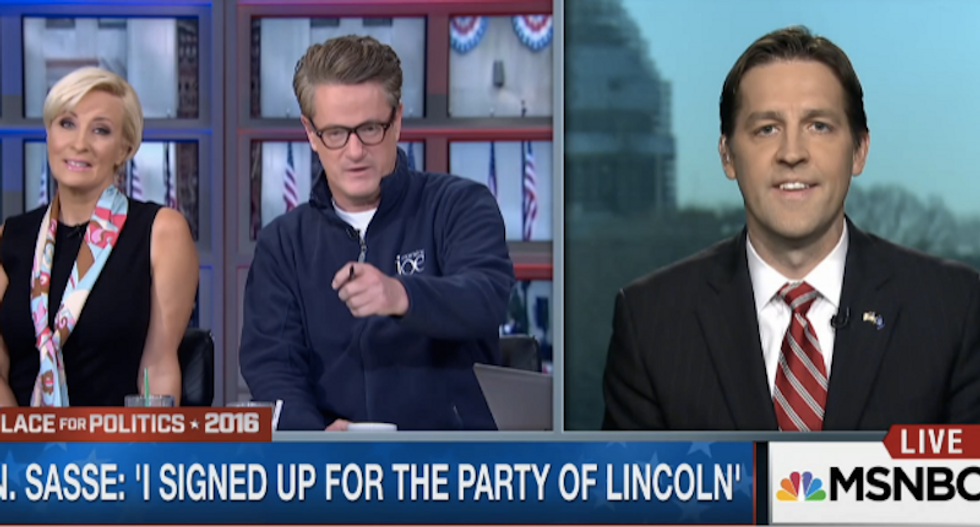 A Tea Party Republican from Nebraska sounded more like a liberal blogger as he called out Donald Trump and his media enablers during a contentious appearance Tuesday on MSNBC's "Morning Joe."

Sen. Ben Sasse (R-NE) vowed Sunday that he would not support Trump, saying he would vote for a third party candidate if the real estate tycoon and reality TV star won the GOP presidential nomination.

MSNBC's Joe Scarborough, long seen one of Trump's biggest backers, and Mika Brzezinski seemed skeptical of Sasse's claims as they hosted the freshman senator to talk about his opposition to Trump.

“Given who this guy is now, I can’t see how we think that,” Sasse said. “I don’t think this guy has any more core principles than a Kardashian marriage.”

Brzezinski asked the GOP lawmaker what he meant by "who this guy is now," and she asked Sasse if he believed Trump could evolve or pivot.

"Do either of you think Donald Trump has core principles?" Sasse said.

Scarborough, who said Trump's mishandling of a question about the Ku Klux Klan was "disqualifying," asked the senator to name a constitutional conservative he would support, and Sasse said he didn't want to play "the name game."

"I'm not playing any games," Scarborough said. "The future of our party, of our conservative cause in the republic is at stake -- I'm not interested in playing games, either."

Sasse said Scarborough had conflated the meaning of America, the republic and the Republican Party.

"Let's first recognize that the Republican Party is just a tool, as all political parties are, and I signed up for the party of Abraham Lincoln, not the party of David Duke (and) Donald Trump," Sasse said.

The 52-year-old Scarborough, who served in the U.S. House of Representatives from 1995 to 2001, interrupted the 44-year-old Sasse with an angry rebuttal.

"You were playing T-ball when I was fighting for those principles, for conservatism, for the Republican Party and this country, and I never conflated conservatism with Republicanism, and I've got thousands of speeches and words to say, but go ahead," Scarborough said.

Sasse accused Scarborough of stooping to a "Donald Trump level" with his "T-ball" swipe, and the MSNBC host said he was trying to be on the senator's side but he was "making it increasingly difficult by being defensive."

"We have to acknowledge, the decline of the media is breathtaking," Sasse said. "What's happened, over the course of the last five or six months, is a whole lot of people have had a lot of fun playing with Donald Trump's reality TV show about our kids' future. I don't think you believe that and I don't think you really believe it, but I think here's what we know comes next."

"If Donald Trump becomes the likely Republican nominee in the next 60 days, all of a sudden, the media is going to grow up and take the guy apart in little pieces, because he's not a serious adult," Sasse added.

Scarborough said he had wondered on Dec. 8 whether Trump's campaign was what Nazi Germany had looked like in the 1930s, and Sasse conceded he had warned against the GOP candidate's rise.

"Can I ask you a serious question?" Sasse said. "Have you guys ever pursued it to make him distinguish between why his presidency would be different than dictator X, Y or Z's? Because everywhere he goes, he plays these little race-baiting games, and he plays games with praising Putin, he says Kim Jong Un should be respected, he says the Chinese who smashed freedom fighters in Tiananmen Square in 1990 --"

At that point, Scarborough cut him off and said he has asked Trump about his admiration for Putin.

"I just don't think you should put us in with the rest of the media," Brzezinski said.

Scarborough complained that the media had been blamed for Trump, saying Republicans had allowed him to take over the GOP.

"Let's back up, and let's give Donald Trump credit for this," Sasse said. "He absolutely, he can recognize an organization that's susceptible to hostile takeover. The Republican Party has been vacuous for a really long time."

NEW YORK — This season of “Saturday Night Live” will wind down with a trip down memory lane as former cast members Steve Martin and Martin Short co-host. Dec. 10 will be Martin’s 16th time as host and Martin’s third, after the duo starred together in Hulu’s “Only Murders in the Building.” Fresh from netting seven Grammy nominations, country rocker Brandi Carlile is booked as the musical guest. Martin’s return to the 30 Rockefeller soundstage follows his two guest appearances earlier this year. He and Martin have made numerous cameos over the years. This Saturday, Emmy winner Keke Palmer hosts,...