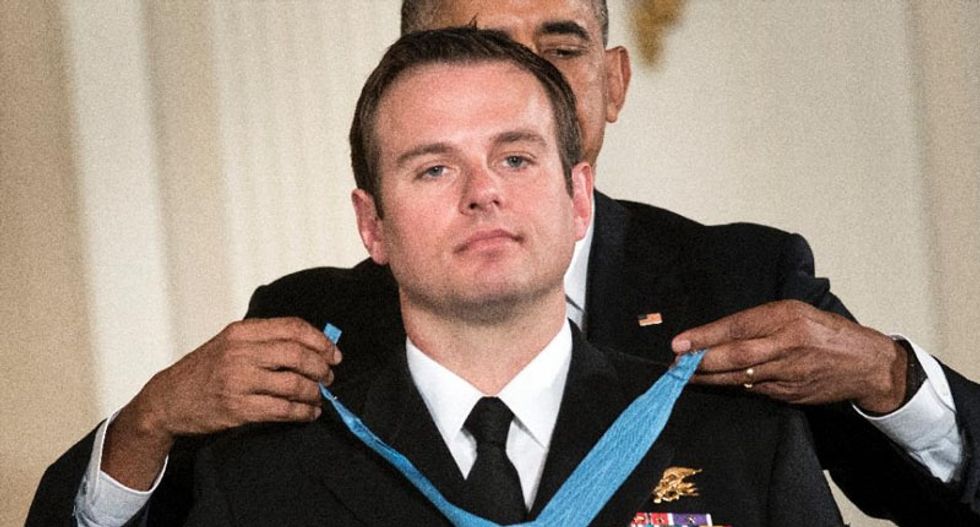 US President Barack Obama presents Navy Senior Chief Petty Officer Edward Byers with the Medal of Honor during a ceremony at the White House on February 29, 2016 (AFP Photo/Brendan Smialowski)

US President Barack Obama presented the nation's highest military award Monday to a Navy SEAL who helped rescue an American doctor during a deadly raid in Afghanistan in 2012.

Senior Chief Petty Officer Edward Byers received the Medal of Honor for battlefield gallantry after he and his team rescued the physician, Dilip Joseph, who had been abducted with his driver and Afghan interpreter on December 5, 2012.

The rescue raid took place three days later in a remote area of mountainous Laghman province in eastern Afghanistan, where Joseph was being held in a one-room building.

As Byers's team entered the structure, one SEAL was fatally shot. Byers went in second and immediately "engaged a guard," the Navy said in a statement.

Inside the room, Byers flung himself onto Joseph and used his own body to shield the doctor while at the same time manually pinning another enemy against a wall until squad mates could tackle him.

"With his bare hands, Ed pinned the fighter to the wall and held him until his teammates took action," Obama said at the medal ceremony.

"It was over almost as soon as it began. In just minutes, by going after those guards, Ed saved the lives of several teammates -- and that hostage."

Obama went on to describe special operations forces as a "strategic national asset."

Byers is from SEAL Team Six, which led the raid on the Pakistan compound of Al-Qaeda leader Osama bin Laden in 2011.

Byers is the sixth Navy SEAL in history to receive the Medal of Honor.