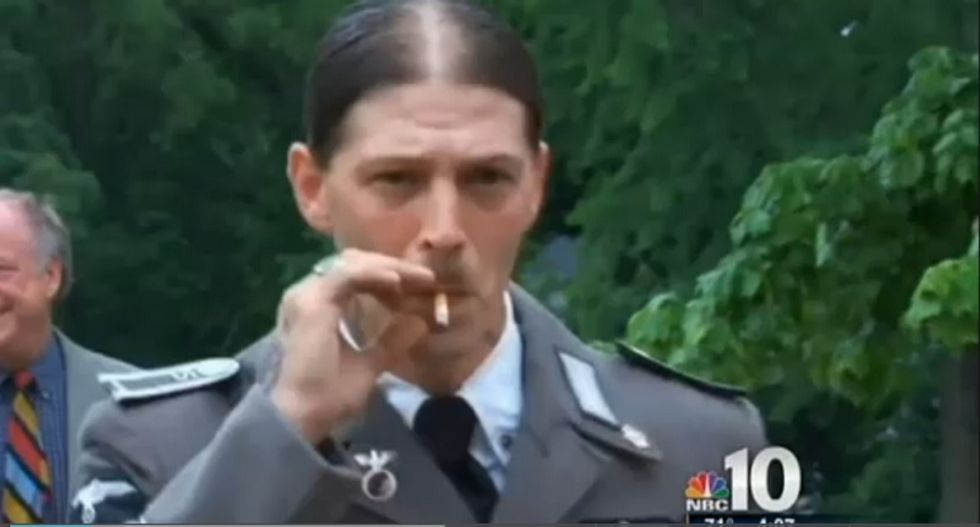 A man who garnered national attention for naming his child "Adolf Hitler" and sporting a Hitler-like mustache was arrested in Pennsylvania this week after skirting law enforcement for months Public Opinion reported.

Isidore Heath Campbell, 42, gained national infamy in 2008 when he insisted that a baker spell out his son's full name on his birthday cake. This became controversial because, according to NJ.com, the child's full name is Adolf Hitler Campbell.

In October, Holland Township police announced there was a warrant out for the elder Campbell's arrest for aggravated assault. Earlier this week, they posted he had been taken into custody.

Campbell had become known as "Nazi dad" after the cake incident.

In 2008, Campbell and his wife, Deborah, were roundly rebuked for naming their then-3-year-old son Adolf Hitler. At the time, Deborah Campbell told NJ.com she had called the local supermarket, ShopRite, in New Jersey. The store ultimately refused the couple's order.

"They need to accept a name. A name's a name. The kid isn't going to grow up and do what (Hitler) did," Campbell said at the time.

According to NJ.com, all of Campbell's children were removed from his custody shortly after the cake incident, including a baby that was born in 2011. He has a total of nine children and has custody of none of them.

Deborah Campbell was also charged with assault, according to NJ.com, after a fight with Heath Campbell's new girlfriend.

Campbell told NBC10 that his children were taken because of Nazi names -- and yet he dressed in full Nazi uniform to see a judge about regaining custody.

"Well you know what, the world needs to see who I am," he told NBC. "I'm not a bad person. It's not what's on the outside of you. It's what's on the inside."

NBC reported Campbell is the founder of a local Nazi group, Hitler's Order.

Campbell was taken into custody after appearing at a tattoo parlor. Police believe he was hiding from authorities.

Watch a report on Campbell by NBC10, as posted here: